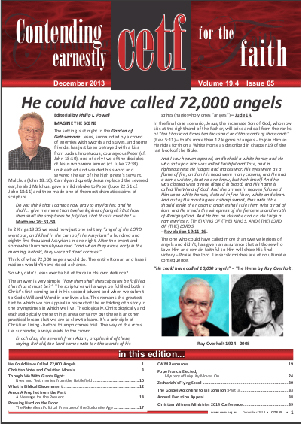 What is Biblical Discernment?

PJ, along with his mother and sister, spent many years searching for a church that preached the truth of God’s Word. After leaving a Baptist church due to its involvement with the ‘Purpose Driven Life’ programme, they spent a couple of years visiting and being involved with a couple of other churches. During this time PJ was all too aware how easy it is to be led astray by false teaching with these ‘churches’ being themselves caught up in the Apostles/Prophets movement, as well as other false teachings. Since the start of 2010 the author has been a part of the Christian Witness Ministries Fellowship (CWMF). The first draft of the following article was written while searching for the truth.

The Bible is the most important and the most precious resource we as Christians own, and yet, there are few churches that preach the messages it holds, especially the good news of the gospel which seems to be vanishing from many church pulpits and messages. As is reported regularly in the CETF magazine many preach a self-help, emergent or seeker sensitive message, where the focus is on ‘bottoms on seats’ and dollars coming in, not on souls being won for eternity. With so much false teaching, being biblically literate and discerning is essential in the season and time in which we are now live.

Here we see how easy it is to be deceived. Jacob tricked, deceived and lied to his father Isaac. Isaac however, was not tricked easily and did ask the question “How is it that you have found it (Game) so quickly, my son?” (NKJV)

Jacob’s answer obviously satisfied Isaac, Why wouldn’t it? It was the textbook answer, “the Lord brought it to me” how can you argue with that?

As Isaac says in verse 22 “The voice is Jacob’s voice, but the hands are the hands of Esau.” He was not 100% sure but was blinded, not just literally but because of Jacob’s lie. In verse 24 Isaac asks, “Are you really my son Esau?” to which Jacob replied “I am.” Which was enough to convince Isaac of Jacob’s Esau-ness. He was deceived by what smelt and felt like the real thing.

This passage serves as an illustration for what is happening in the church today. As many of us know the prosperity, purpose-driven, emergent, social, seeker sensitive and watered-down gospel is taking over much of the church. This false gospel may feel and smell, like the real thing. However it could not be further from it. Many are blinded to this different gospel and are being led astray.

As it says in John 10:10: “The thief does not come except to steal and to kill and to destroy”. The enemy, the devil, is behind what is going on. As we approach the glorious day of the return of our Lord and Saviour the devil is out to lead as many away as possible—to steal, kill and destroy the flock of our good shepherd, Jesus Christ.

This should not come as a surprise to us. Jesus warned us about this exact thing.

And Jesus answered and said to them “Take heed that no one deceives you. For many will come in My name, saying, ‘I am the Christ, and will deceive many’ ”

In order to not be deceived we need to be discerning. Simply put discernment or being discerning is checking what one reads, hears or sees with the Word of God (Bible) to see if it is biblical and of God. As Charles Spurgeon put it,

Being able to distinguish the difference between what is of God and what just ‘looks and smells’ as if it is.

There are two common misconceptions about discernment. The first one relates to the gifts of the Holy Spirit (spirituals) mentioned in 1 Corinthians 12. Is discernment a spiritual gift that only some have? As Philip Powell points out in the book he co-authored with Aeron Morgan ‘Gathering the Faithful Remnant’; this view is wrong. He states, “Biblically there is no such gift as ‘discernment’, which really describes an ability, which some people are better to exercise than others. The gift is called the ‘discerning of spirits’ … an enabling by which the Holy Spirit to discern whether a person is operating by a false, wrong or evil spirit”.

The Moriel Ministries website under The Problem with Discernment observes,

The second misconception regarding discernment is to do with publicly showing error in someone’s teaching. Here many appeal to Matthew 7:1-2:

Judge not, that you be not judged. For with what judgment you judge, you will be judged; and with the measure you use, it will be measured back to you.

They say that we should not judge the teaching of others or speak against “God’s anointed”.

This is a wrong way to look at discernment; firstly we are not judging the person, only their theology, and understanding of scripture and we have to be doing it in love. Out of love for the person, we want them to know and understand the fullness of God and his grace and out of love for those hearing the false message; they need to find true salvation in Jesus Christ. Secondly these verses in Matthew 7 should actually serve as an encouragement to be discerning, we should be accountable to each other, using the Bible as the reference to test what others say and know that we will also be tested by the same means.

So what should our response be? How can we be discerning?

In Acts 17 we read about the brethren at Berea, verse 11

These were more fair-minded (noble) than those in Thessalonica, in that they received the word with all readiness, and searched the Scriptures daily to find out whether these things were so.

Matthew Henry Comments on this scripture:

Their readiness of mind to receive the word was not such as that they took things upon trust, swallowed them upon an implicit faith: no: but since Paul reasoned out of the scriptures, and referred to the old testament for proof of what he said, they had recourse to their Bibles, turned to the places to which he referred them, read in context, considered the scope and drift of them, compared them with other places of scripture, examined whether Paul’s inferences from them were natural and genuine and his arguments upon them cogent, and determined accordingly.

Dear reader this is what we are to do. We are to check everything with the Word of God, making sure that what we hear or read aligns with what God says in His Word. After all as Hebrew 4:12 says

For the word of God is living and powerful, and sharper than any two-edged sword, piercing even to the division of soul and spirit, and of joints and marrow, and is a discerner of the thoughts and intents of the heart.

I would encourage you all to read your Bible on a regular basis as much as possible. I think a daily reading works best. I know it can be difficult and there are many times when I struggle to do it. However we need to know the Word of God, it is “living and powerful.”

In 2 Timothy 3:13-17 we see an additional warning about the deception and an encouragement to continue in what has been learnt and in the knowledge of the scripture. It seems pretty clear that in order to avoid deception we should be grounded in the Bible and not following any new and seemingly exciting thing.

But evil men and impostors will grow worse and worse, deceiving and being deceived. But you must continue in the things which you have learned and been assured of, knowing from whom you have learned them, and that from childhood you have known the Holy Scriptures, which are able to make you wise for salvation through faith which is in Christ Jesus. All Scripture is given by inspiration of God, and is profitable for doctrine, for reproof, for correction, for instruction in righteousness, that the man of God may be complete, thoroughly equipped for every good work.

This section of scripture concludes beautifully with the purpose of scripture, which is that we ‘may be equipped for every good work’.

Brothers and Sisters the Bible is everything we need!

I am reminded of the old children’s Sunday school song:

Let’s stand on the Word of God alone.

And this I pray, that your love may abound still more and more in knowledge and all discernment - Philippians 1:9.

PJ is a part of Christian Witness Ministries Fellowship (CWM-F) where he attends with his Mother and Sister. He is also involved with the Australian Fellowship of Evangelical Students (AFES) group at Queensland University of Technology. As a young man he has a heart to serve the Lord, for the word to be preached faithfully and to see others come to a saving faith in Jesus Christ.