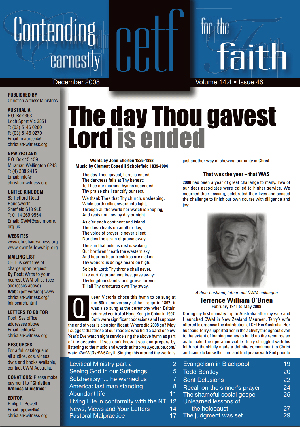 Wisdom cries out loud in the streets, she rais­es her voice in the squares… (Proverbs 1:20).

Harvard’s motto is “Veritas”. Many of you have already found out, and others will find out in the course of their lives, that truth eludes us if we do not concentrate our attention totally on its pursuit. But even while it eludes us, the illusion of knowing it still lingers, and leads to many misunderstandings.

Alexander Solzhenitsyn, a Nobel Prize winning author, Soviet dissident and a survivor of an eight year sentence in the brutal Soviet Gulag system, passed away on August 3, 2008 in Russia. He had been exiled from his homeland for his writings, in 1974, and lived in Vermont, USA until 1994 when he was able to return to Russia.

His passing is being largely noted because he was useful in exposing to the outside world the brutality and suppression by the Soviet system, through novels based upon his own experiences in the Gulags, such as A Day in the Life of Ivan Denisovich, and Cancer Ward. His non-fiction expose, The Gulag Archipelago had to be smuggled out of the USSR and published first in France. It was this particular book which led to his banishment from Russia.

What will perhaps not be as appreciated as it should be is the fact that Solzhenitsyn used the occasion of a Harvard Laureate Award in 1978 to offer a warning to the West that was both stinging and timely. Unfortunately the warning largely went unheeded, as always “A prophet is without honour …”, even though not in his native country in this case. The speech, A World Split Apart created a firestorm of controversy, warning the West of its spiritual emptiness and blindness. President Carter snubbed him, his wife Rosalyn repudiated the speech at the National Press Club, and there were editorials in the New York Times and the Washington Post, among others, which railed against the speech. What did he say that caused him to go from a ‘cause celebre’ to almost a pariah? Among other things, he called us on our failure of courage,

A decline in courage may be the most striking feature, which an outside observer notices in the West in our days. The West­ern world has lost its civil courage, both as a whole and separately, in each country, each government, each political party, and, of course, in the United Nations. Such a decline in courage is particularly noticeable among the ruling groups and the intellectual elite, causing an impression of loss of cour­age by the entire society. Of course, there are many courageous individuals, but they have no determining influence on public life. (A World Split Apart)

He warned us that we were losing the courage to defend our own civilization, that especially in our leadership, self serving calculation was taking the place of real conviction and that the outcome would be devastating. Solzhenitsyn warns us,

Should one point out that from ancient times declining courage has been considered the beginning of the end? (ibid)

Solzhenitsyn then offers a diagnosis as to what happened to make us lose courage—the false belief that individual freedom would guarantee happiness—as in The Pursuit of Happiness, although he warns us that the meaning of the word “happiness” has been debased lately,

Every citizen has been granted the desired freedom and material goods in such quan­tity and of such quality as to guarantee in theory the achievement of happiness—in the morally inferior sense of the word which has come into being during those same decades. (ibid)

Freedom without restraint has not given us “happiness”. In fact, Solzhenitsyn charged that such “freedom” is the cause of much of the depression and disillusionment that characterizes western society.

Ironically, on top of the rebuttal of our concept of freedom, he accused us of becoming a hyper legalistic society. See if this doesn’t speak to the situation as it stands today,

People in the West have acquired consider­able skill in interpreting and manipulating law. Any conflict is solved according to the letter of the law and this is considered to be the supreme solution. If one is right from a legal point of view, nothing more is required. Nobody will mention that one could still not be entirely right, and urge self-restraint, a willingness to renounce such legal rights, sacrifice and selfless risk. It would sound simply absurd. One almost never sees voluntary self-restraint. Everybody operates at the extreme limit of those legal frames. (ibid)

It is this “skill” at the use of the letter of the law in the very face of the ‘spirit’ of the law that has developed into the Death of Common Sense as the title of a book written by a Federal Judge decries. How else is it that the enemies of our civilization have any hope of destroying us, other than through our courts, and the very ‘legalistic spirit’ our friend Solzhenitsyn warned us of? On this point he rightly concludes that such use of legalism will lead to two evils—the paralysis of true leadership and the inability to resist societal evil.

Destructive and irresponsible freedom has been granted boundless space. Society WEST appears to have little defence against the abyss of human decadence, such as, for example, misuse of liberty for moral violence against young people, such as motion pictures full of pornography, crime, and horror. It is considered to be part of freedom and theoretically counterbalanced by the young people’s right not to look or not to accept. Life organized legalistically has thus shown its inability to defend itself against the corrosion of evil. (ibid)

We didn’t have to wait very long to see the words of this prophecy come to pass—within ten years of Solzhenitsyn’s Harvard address, President Reagan’s counsel on pornography failed to even be able to agree on a definition of pornography. Do “we the people” really want pornography, gay marriage, abortion or Sharia law? Absolutely not, but unfortunately for us the pornographers, Sodomites, Eugenicists2 and CAIR3 are all able to successfully employ legal counsel, in a legalistic system to impose their will to the devastation of our society! Exactly what Alexander Solzhenitsyn warned us of in 1978.

Perhaps it was his critique of our flawed analysis of human nature that stung us the most, our humanism leads us to deny the effects of the fall. Therefore freedom without corresponding sense of responsibility to the spirit tilts towards evil.

Such a tilt of freedom in the direction of evil has come about gradually, but it was evidently born primarily out of a humanistic and benevolent concept according to which there is no evil inherent to human nature. The world belongs to mankind and all the defects of life are caused by wrong social systems, which must be corrected. (ibid)

No wonder he was so ill received! He was “messing with our religion” of a humanistic utopian Brave New World. I have no doubt he was rejected largely because he diagnosed our problem as being the same problem the Russian people suffered from, Humanism!

There is a disaster, however, which has already been under way for quite some time. I am referring to the calamity of a despiritualized and irreligious humanistic consciousness. To such consciousness, man is the touchstone in judging everything on earth—imperfect man, who is never free of pride, self-interest, envy, vanity, and dozens of other defects. We are now experiencing the consequences of mistakes which had not been noticed at the beginning of the journey (ibid)

I am in danger of quoting the entire speech. My commentary really doesn’t do it justice. You can read it yourself at http://www.americanrhetoric.com/speeches/alexandersolzhenitsynharvard.htm

We were officially warned thirty years ago, and for the most part have failed to heed the warning which has been validated by history point by point.

Solzhenitsyn calls us to reject our humanism—the “ossified” dogmas of the Enlightenment and to return to our “Christian roots”—nothing short of spiritual renewal! Almost anticipating the current Islamic Jihad, he warned us that without spiritual renewal, the humanistic and Godless West would be rendered “unable to resist the East”.

Rest in peace Alexander Solzhenitsyn. You warned us.