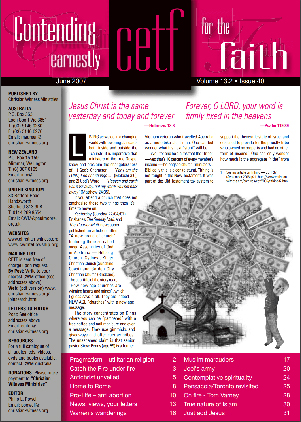 From The Berean Call: The late Paris Reidhead was a missionary in Africa for many years and continued his effective ministry in the USA pastoring and preaching. The following excerpt comes from his sermon Ten Shekels and a Shirt (from Judges 17 & 18) and sounds as fresh and pertinent today as when it was preached in the mid 1960s. Following are excerpts.

WOULD I be out of line if I were to talk to you for a little while about utilitarian religion and expedient Christianity? And a youthful God? I would like to call attention to the fact that our day is a day in which the ruling philosophy is pragmatism. You understand what I mean by pragmatism? Pragmatism means if it works, it’s true. If it succeeds, it’s good. And the test of all practices, all principles, all truth, so called all teaching, is do they work? Do they work? Now according to pragmatism, the greatest failures of the ages have been some of the men God has honoured most.

For instance, whereas Noah was a mighty good ship builder, his main occupation wasn’t ship building, it was preaching. He was a terrible failure as a preacher. His wife and three children and their wives are all he had. Seven converts in 120 years, you wouldn’t call that particularly effective.

And then we come down across the years to another man by the name of Jeremiah. He was a mighty effective preacher, but ineffective as far as results were concerned. If you were to measure statistically how successful Jeremiah was, he would probably get a large cipher. For we find that he lost out with the people, he lost out with royalty, even the ministerial association voted against him and wouldn’t have anything to do with him. He had everything fail. The only one he seemed able to please was ... God, but otherwise he was a distinct failure.

And then we come to another well-known person, the Lord Jesus Christ, who was a failure by all the standards of judgment. He never succeeded in organising a church or denomination. He wasn’t able to build a school. He didn’t succeed in getting a mission board established. He never had a book printed.

The question comes then to this, “what is the standard of success and by what are we going to judge our lives and our ministry?” And the question that you are going to ask yourself, “Is God an end or is He a means?”

And so we’ve got to ask ourselves at the very outset of our ministry, and our pilgrimage, and our walk, “Are we going to be Levites who serve God for ten shekels and a shirt?” (Judges 17:7-11). Serve men perhaps in the name of God, rather than God [Himself].

He was very happy when he found that Micah had an opening. But he had decided that he was worth ten shekels and a shirt, and he was prepared to sell himself to anyone that would give that much. If somebody came along and gave more, he would sell himself to them (Judges 18:18-20). But he put a value upon himself and he figured then his religious service and his activities were just a means to an end, and by the same token, God was a means to an end.

Let’s be done, once and for all, with utilitarian Christianity that makes God a means, instead of the glorious END that He is. Let’s resign, let’s tell Micah we’re through. We’re no longer going to be his priests serving for ten shekels and a shirt. And let’s come and cast ourselves at the feet of the nail-pierced Son of God and tell Him that we’re going to obey Him, and love Him, and serve Him, as long as we live BECAUSE HE IS WORTHY!

PARIS REIDHEAD (1919-1992) devoted his life to communicating the gospel throughout the world. As deputation secretary of the Sudan Interior Mission in the south-eastern United States, he was a recognised spokesman for missions. In 1953 Mr Reidhead began his Bible Conference ministry for the Christian and Missionary Alliance which brought him, in 1956, to the pastorate of the Gospel Tabernacle, the New York City church. Third World development became his full-time commitment in 1966. www.bibleteachingministries.org