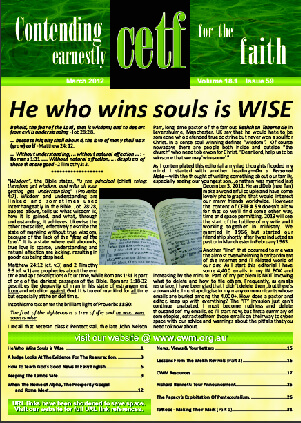 Letters may be edited for brevity.

From the CWM Blog

To comment go to – http://www.christian-witness.org/blog/Find the thread (topic) and make your comment at the end of that thread:

Other interesting posts may be viewed at the following:

From The Regular Mailer

To subscribe go to the home page and and follow the prompts at the bottom of the left hand side:

Sun 25/12/2011 4:35 PM Dear Philip and Kath, Thank you for your Christmas greetings and kind words. I think 2012 will prove to be a year of great testing for His faithful 'remnant' in our nation. A time when it will need [that we] stand firm, perhaps like never before in this nation, and it will not be appreciated by the majority. With a weak and splintering Christian voice, and a government which knows no boundaries it will not cross to stay in power, I think things will become very challenging indeed. Thank you both, for your faithful stand.

Email 13/01/2012, at 7:14 PM, Dear Lance.......I was rapt to read your article in CETF....very good and spot on.....My question is ....where do we go......when I got saved 30 years ago the Lord told me that we would go back to house church in the last days....just like the early churches ...meeting in homes....I for one, am fed up with sitting week in and week out in a dead church.....where God doesn't even show up...because it’s all man...even the elders don't come to the prayer meeting nor does the minister....who calls himself a pastor but is NOT God appointed.....they arrive 10 minutes before the service and the flesh exalts itself....will I hang in there...like I have been for the past 4 years....you see I feel trapped because they have kindly rented the manse attached to the church at a low rental....and as I am a single pensioner...I feel it's God's blessing....but I have to endure that the Holy Spirit is not welcomed.....please answer and tell me what to do.....I think I already know...I have to stay until God opens another door....thanks again....God bless you in your endeavours for Him.....

Ed – Sadly your story can be told over and over again and it doesn't relate only to Hillsong though within Australasia probably Hillsong is the most blatant example of what we are addressing. There is no biblical basis for a “church” becoming a corporation and the senior pastor its Chief Executive Officer (CEO) with a grandiose administrative structure from the senior pastor's Personal Assistant (PA) down. This all savours of Nicholaitanism, which God hates cf. Revelation 2:6. There is no elitism or a two-tiered structure of ministry in God's Church “he that is greatest among you shall be your servant” – Matthew 23:11 cf. Luke 22:26. Of course the Holy Spirit withdraws from all such “organisations” and that is what you are experiencing. Sadly, there are thousands of people like you. Many have not yet woken up to what is going on. It is all part of the end time apostasy—cf. 2 Thessalonians 2:3 cf. verses 1-16 and Luke 18:8. So my only advice to you is that you may indeed need to endure what you are experiencing given your stage of life for social and welfare reasons. Others may need to “buck the system” and take a stand against this dreadful trend towards total “apostasy” – plp.

Dear Philip: Happy New Year. I hope 2012 brings a far greater positive outlook for you and your family, firstly with respect to physical health. I also sincerely pray God's blessing on the work of your ministry. I am concerned about the errors riddled throughout a gentleman (sic) I would call mischievous in the least (sic) that has appeared in the last three CETF's - Lance Goodall. He appears to have being trying to make a point by attaching a public comment in response to a youtube clip not authored, authorised and likely not monitored by Planetshakers to show their influence. He then goes on to criticise Brooke Fraser for writing songs that reach a wider public than the Church. We are called to reach outside of the Church my friend, and Brooke has done that. Further the attack on Guy Sebastian is baseless and cowardly. Firstly, to the more learned (of the Scriptures) reader, the very verse before Leviticus 19:28 says:

27Do not cut the hair at the sides of your head or clip off the edges of your beard.

Looking at Lance's photograph he has committed a felony equivalent to Guy Sebastian's tattoo. Secondly, unless he has confronted Guy personally about his tattoo rather than publicising his verbal diatribe in a three part series called Hellsong where someone has attempted to take the mickey out of the Hillsong fontage (sic – this is not a dictionary word) he has failed to follow Christ's command in Matthew 18:15. Finally, he talks about the great falling away. It is quite ironic that straight afterwards it says that he has 'left' the Australian church growth movement. Lance, I am sorry you are bitter and I do not necessarily agree with everything Hillsong Church does either. I have no doubt, having spent a good 6 years there (I am no longer there) due to being called to serve with a pastor in another location, that it is not a 'perfect match' to what I envision Christ's bride to be - but then I look at the plank in my own eye and realise that the speck that you have expounded into a three part series of largely hearsay rather than heresy and my prayer becomes that Hillsong'smessage would give more glory to the Lord and its INFLUENCE to the nations would be even greater than it has.

I expect I will hear back from either or both of you, although I would prefer not to get into a meaningless argument. I have made my point and just pray that each one of us would become more Christ like by HIS grace, and our earnest seeking of him. I pray that our faith would be made complete as we endure trials and run the race that He has called us to run. AMEN.

PS. My cousin served on the Hillsong choir for many years (and in fact still very occasionally serves).

Ed – Phil Grindley's (PH) communiqué was a result of our public email so I have felt the matter should be aired publicly. Phil is constantly having snipes at us and always side steps the issue, making false, unsubstantiated accusations against us. Following a great deal of correspondence PG told me some time ago that he had left Hillsong, which is good news, though clearly he retains links. The above email evoked a spate of correspondence which is too much to publish here. The main point about Tattoos is addressed by writer Lance Goodall in his series of articles on this topic starting on herein. CWM's deep concern relates to the pandemic of worldliness invading the church, exacerbated by the bad example of leaders such as Joel Houston, Guy Sebastian and Todd Bentley all of whom unashamedly parade the tattoos which they obtained as professing “Christians.”

Hello - your text on this site is really inspiring. It's simply fantastic material that you have written here. So as always, I can't wait to hear more of this. What we see here is really an awesome post.

Living in a Fool's Paradise

Dear Philip, Your article 'Living in a Fool's Paradise' has arrived at a very opportune moment, thank you.