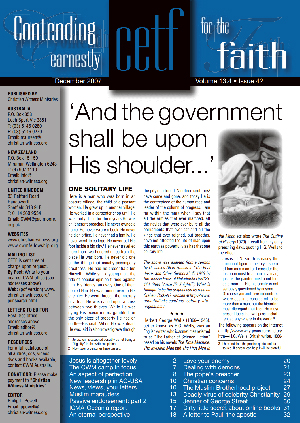 DR GEORGE O. WOOD was elected the 12th general superintendent, August 9, at the 52nd General Council. Having served as general secretary since 1993, Wood fulfills the unexpired term of Thomas E. Trask, who stepped down during the middle of his four-year term. (Resignation letter.) Needing a two-thirds majority, Wood was elected on the sixth electoral ballot, receiving 70% of the vote. Read Wood’s biography.

It is unusual for an AoG official, especially the general superintendent, to resign mid-term. We await possible further disclosures regarding Mr Trask’s resignation. Meanwhile sadly AG-USA is in for more of the same in respect of their mad dash down the Purpose Driven and Emergent Church roads. In an email that CWM holds in our files (September 22, 2007) George Wood, who referred to himself as “General Superintendent Elect”, wrote:

My son-in-law’s conversion is the direct result of Rick Warren’s ministry. I worshipped with members of my family at Saddleback two weeks ago. In just one week, they baptized over 500 persons. I am not going to be part of any effort to denigrate what God is doing through Rick Warren, and the purpose driven model.

There you have it. So much for: “Salvation [is] of the LORD” (Jonah 2:9) not of Rick Warren. In the above mentioned email the new superintendent also shows his hand as being a person who is more influenced by numbers and personal associations than by biblical doctrinal standards. The die has long since been cast within Assemblies of God. If recovery is at all possible there’s got to be some basic changes and it will be a long way back.

You can read about the atrocious conduct of former general superintendent Trask on the CWM website at: http://www.christian-witness.org/aog/aog.html plus an examination of the white-wash interview between Trask and “Today’s Pentecostal Evangel” (TPE) editor-in-chief Hal Donaldson, who asked one good question which Trask failed to answer and Donaldson failed to press. The interview was a total white-wash.

Undoubtedly we have not heard the last of this. We suggest you keep an eye out for new postings on: http://www.christian-witness.org/aog/aog.html