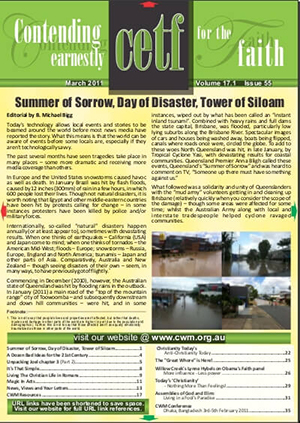 Today's Christianity - nothing more than feelings

This may come as a shock to most Christians, but if you do a search of the older translations of scripture, the word“ feelings” is virtually nonexistent. Where it does appear, it has more of a superficial, even negative attribute than a positive; and yet, as we watch and listen to many from today's churches, be they leaders or laymen, not only do we see a clear fixation on feelings, both physical and emotional, but we also notice that those feelings have by and large become a replacement for faith.

In fact, if you substitute the word “feelings” wherever you see the word “faith” in those older Bible versions, it will become clear to you what motivates and guides the average “Christian” today – point being: most of us are not following the Living Word of God by faith, we're simply following our feelings and calling it “faith.”

This doesn't require a Bible.

When one considers the sobering words of the prophet Jeremiah, who said: “The heart is deceitful above all things, and desperately wicked…” it should cause us to take a discerning look at what moves us. If our worship and service of Jesus Christ is measured by mood, then may I suggest our “Christianity” is more theatrical than theological?

Could it be those laughing and crying masks taken from Greek comedies and tragedies that once hung in old movie theatres now belong on t e walls of today's churches? Honestly, is that not what many of us come to church for these days – to hopefully experience a good laugh or cry with friends, aided by mood-altering music, motivational speakers, movie clips, drama and sugary snacks? Is this not what many modern day preachers, teachers, pastors and worship leaders attempt to facilitate among their congregants and class members through emotional presentations and elaborate productions… strong feelings that generate laughter, tears and applause?

And, if you haven't noticed, leading the charge are people who are very “passionate.”

You see, “passion” is a buzzword that is commonly used among contemporary Christians to give assorted “ministries,” however abstract and bizarre, a perceived legitimacy. If a Christian is “passionate” about something, it is automatically assumed and accepted by the brethren to be God-ordained, in spite of what the Bible teaches.

As flesh, we are naturally drawn to whomever or whatever gratifies us; but that does not mean all people, places and things that make us feel good are good for us. Feelings are easily manipulated, especially in group settings where consensus is king; and those feelings can become obstacles in our obedience to Christ when we make them our primary motivation and navigation through life.

We know that drugs, alcohol, food, sex, entertainment, recreation and career can all be addictive and destructive when misused and abused. Add wealth, fame, power and influence to the mix, where pride becomes an accelerant, and you have an explosive combination. What most of us, even Christians, don't realize though is that at the heart of it all is the subtle setting-aside of God's Word in order to feel good.

Some of us do it for results, and others, for relationships.

Eve was deceived by the serpent's seductive words and took of the forbidden fruit to get results and thus feel good about herself. Adam accommodated her because of their relationship in order to sustain the connection and good feelings between them. She chose results and he chose relationship – both chose to feel good at God's expense; and it backfired.

This is the 21st century church.

Mind you, the objective here is not to feel bad, but to hear, obey and proclaim the Word of God regardless of how it makes anyone feel. When we ignore His Word to spare our own feelings, we resist the Holy Spirit. And, when we withhold the Word from others to spare their feelings, we stifle our witness and demonstrate to one and all that we are more interested in gratifying goats, seducing sheep and running rampant with the herd, than submitting to the Shepherd.

This is why the church is in such decline – because we are going out of our way and sparing no expense to accommodate people and their passions instead of God and His Word.

Do we really expect the Lord to bless and multiply that?

I charge you therefore before God, and the Lord Jesus Christ, who shall judge the living and the dead at His appearing and His kingdom; Preach the word; be instant in season, out of season; reprove, rebuke, exhort with all long suffering and doctrine. For the time will come when they will not endure sound doctrine; but after their own lusts shall they heap to themselves teachers, having itching ears; And they shall turn away their ears from the truth, and shall be turned unto fables. – 2 Timothy 4:1-4

In an attempt to feel better, both physically and emotionally, today's Christians are turning not only to eastern mysticism for feel-good results through yoga and mantra meditation, but also to people from other religions and beliefs for feel good relationships in spite of the Bible's warning against offering “vain repetitions” for prayer and being “unequally yoked” to unbelievers. But in doing so, the 21st century church is being led into a religion where it doesn't matter as much what you believe as it does what you feel.

This is not Christianity – this is Feelianity.

The old 60's slogan, “If it feels good, do it,” is now the measure of health and morality here in America and is spreading like a plague among processing Christians with little or no objection from church leaders who ought to know better. “Christian Mysticism,” often referred to as “contemplative spirituality,” was introduced to many protestants in and through the Emergent Church and is now going mainstream thanks to the “Willowback phenomenon” as Lifeway Research's Ed Stetzer calls it – referring to the overwhelming number of churches that embraced and adopted the teachings and practices of 'Becoming A Contagious Christian' author and pastor, Bill Hybels from Willow Creek Community Church and 'Purpose Driven Life' author and pastor, Rick Warren, from Saddleback Community Church.

In a recent Tennessean article titled, More churchgoers ditch their denominations, readers learn that churchgoers have by and large “ditched their denominations” for church networks, creating, in the view of this writer, a de facto denomination based, not on the absolute truth of God's Word, but on an end-justifiesthe- means “evangelism” where results and relationships are everything.

But, the church is not growing – at least not here in America, because Christians aren't taking up their cross for the Saviour they claim and are, more often than not, surrounding themselves with ear-ticklers who tell them what they want to hear rather than what the Word of God says – believing that feeling good is good and feeling bad is bad.

You see, today's church is producing feelers for Jesus instead of followers of Christ. But does anyone believe for a minute that our Lord felt good upon that cross? Did the early church focus their efforts and attention on better health, a better life and making this world a better place? If they did, they failed miserably.

When tribulation finally comes to America, many of today's “Christians” will think God has turned His back on them or doesn't really exist at all having never learned that loneliness, loss, betrayal, pain, rejection, scorn, sacrifice and suffering are all part of a faithful Christian's walk. And when someone comes along offering an alternative, many will follow him as their new christ because he will make them feel good.

Even so, I believe there will be others who will learn by the grace of God, if they live long enough to lose everything and everyone dear to them, that what they thought was contemporary Christianity, was really only apostasy, and that one's love for Jesus is not measured by their acquiescence to and acceptance of this fallen world and its feel-good ways, but rather by their obedience to His Word and a willingness to lose their all for Him and His kingdom to come.

For what shall it profit a man, if he shall gain the whole world, and lose his own soul? – Mark 8:36

Paul Proctor, a rural resident of the Volunteer state and seasoned veteran of the country music industry, retired from showbiz in the late 1990's to dedicate him self to addressing important social issues from a distinctly biblical perspective. As a freelance writer and regular columnist for NewsWithViews.com, he extols the wisdom and truths of scripture through commentary and insight on cultural trends and current events. His articles appear regularly on a variety of news and opinion sites across the internet and in print.