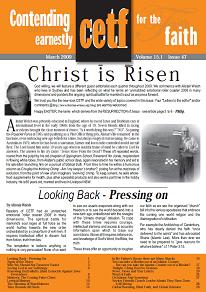 Looking Back - Pressing on

Looking Back - Pressing on

Readers of CETF had an unmatched emotional “roller coaster 2008” in many dimensions. The spiritual battle for mankind's soul rages at full force as the world hurtles towards the new order orchestrated by a consortium of evil men. It requires intellectual effort to discern fact from fiction, truth from lies.

The temptation to believe anything or nothing is very persuasive! None of us want to see our assets evaporate along with our freedom or to see the world descend into a new dark age, embellished with the ravages of the “climate change” delusion. To cope with these times requires courage, intellectual stamina, and access to accurate information upon which to base our convictions.Above all it requires reliance on, and knowledge of God'sWord, the Bible, the truth.

These times offer an opportunity to toughen our faith as we see the organised “church” fall into the various apostasies that embrace the coming one world religion and the disintegration of civilisation.

For example the Archbishop of Canterbury, who has clearly denied the faith “once delivered to the saints” and has advocated Sharia (Islamic Law). More than ever we need to be prepared to “give reasons for what we believe”. cf. 1 Peter 3:15.

We are being plunged into a time about which the Bible has more to say than any time in earth's history, including the time that Jesus walked the shores of Galilee and climbed the mountains of Judea.

Is this true? Be a Berean and consider whether there is evidence for this conclusion or if the author like so many today is being over simplistic.

Israel is back in her homeland. The world has developed weapons capable of wiping out humani ty, a prerequisi te for Armageddon. We know, from the Bible, that the Lord Himself will intervene to prevent the annihilation of the human race and the total destruction of planet earth.

Countries foretold in the Bible are aligning to attack Israel. The Roman Empire is rising again. In January 2009 Turkey confirmed herself as an ally of Russia, thus another pawn is in place. We have the technology to chip everybody and run the world money system by computer to enable the man of sin to govern. The international financial system is collapsing as the architects call for a “new world order” - just as the Kings of the East have multiplied enough to supply sufficient soldiers to create the huge armies of men described in Revelation 9:16.

This is indeed a powerful mix to get us CETF readers thinking and seeking the "Lord of lords and King of kings" with all our might (cf. Revelation 19:16).

Additionally there is a breakdown in law and order across the nations, a rise in immoral behaviour and an official condoning of homosexuality, not seen since the days of Noah and Lot. Earthquakes have increased by some thirty percent in the last five years and violent storms rage across the planet. Hollywood pours out filth in unprecedented volumes as the world changes marriage partners like a fashion statement and murder innocent babies in the womb because they don't fit our perceived lifestyle.

We have empowered the Muslim world with finance through our greed for oil, and allowed Islam to dictate to us in our own countries in the name of tolerance and multiculturalism. Invariably, where tolerance is preached truth is banished.

To keep a steady mind in these times requires us to become absolutely certain that the Bible is true and that God's promises are real and unbreakable. We need to unswervingly follow the King of Kings, the only ruler of princes. God's nation, Israel, could not break the Abrahamic Covenant even if she wanted to. It is unconditional. The “Church” is not Israel.

Preterism, Kingdom Now Theology, Amillennialism and other theories have been weighed and found wanting. Some are simply the fruits of bad and lazy scholarship born from wishful thinking and rebellion against theWord of God—“I am not ready for the Lord's return; I'm too busy with my work and my ministry

Thus people convince themselves these things are not happening. The return of Christ will catch them by surprise as a thief in the night. The true believer is prepared and is not caught by surprise.

not be afraid of the terror by night, Nor of the arrow that flies by day, Nor of the pestilence that walks in darkness, Nor of the destruction that lays waste at noonday (Psalm 91:5-6).

What a wonderful promise!

This Easter and for evermore

The LORD bless you and keep you; The LORD make His face shine upon you, And be

The LORD bless you and keep you; The LORD make His face shine upon you, And be gracious to you; The LORD lift up His countenance upon you,And give you peace (Numbers 6:24-26 – NKJV).

Alistair Welch was privately educated in England, where he raced Lotus and Brabham cars at international level in the early 1960s from the age of 19. Seven friends killed in racing accidents brought the clear moment of choice: “Is it worth dying this way?” “NO”. So joining the Royal Air Force in 1965 and qualifying as a Pilot Officer flying jets, Alistair’s life remained in the fast lane, even embracing new age beliefs for a time, but always empty of real meaning. He came to Australia in 1970, where he has been a salesman, farmer and keen radio controlled model aircraft flyer. The Lord found him some 19 years ago when in suicidal frame of mind he called to God for answers. The answer to his cry came: “Jesus Rose From the Dead”! These oft repeated words, roared from the pulpit by his old chaplain of Uppingham School, Reverend Ifor Jones, resplendent in flowing white robes, from Alistair's public school days, again resonated in his memory and led to his salvation launching him on a pursuit of biblical truth. From time to time he writes a humorous column as Chugley the thinking Chimp -Am I my keeper’s brother?,poking fun at the craziness of evolution, from the point of view of an imaginary “evolving” chimp. To keep solvent, he sells wholefood supplements for health, plus other specialist products and also works part time in the hobby industry. He is 65 years old, married and lives in Liverpool NSW.