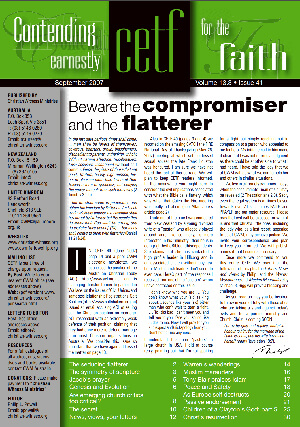 He took his brother by the heel in the womb and by his strength he had power with God: yea he had power over the angel and prevailed; he wept and made supplication unto Him, he found Him in Bethel and there He spake with us, even the Lord of Hosts, the Lord is his memorial (Hosea 12:3-5).

HE above passage is a surprisingly succinct summary of the experience of Jacob, particularly in regard to his conflict, wrestling and prevailing in prayer. The scripture here refers to the occasion which is dealt with in Genesis chapter 32 when Jacob is on his return from serving Laban in the "country of Syria" (Hosea 12:12).

He is returning to his home country with his family when he suddenly learns that Esau, the brother that he has wronged, is charging towards him at the head of an army. Naturally speaking Jacob had not the faintest chance of defeating so powerful a foe. He had but a handful of young men with him; his own children were probably not even in their twenties, a few herdsmen and a good number of women and children. Really the position could not have been more hopeless. Jacob was petrified and reasonably so. Perhaps this is the starting point in his prevailing prayer.

Essentially we have three enemies: the world, the flesh and the devil. And to know the power of this opposition is of great importance. Any of the three, or any combination of them, can bring utter destruction. Further to understand that we have no resource in ourselves sufficient to defeat any of these enemies is also of great advantage spiritually.

It was absolutely clear to Jacob that he had to have a direct intervention from heaven if he and his family were to survive this encounter with the approaching enemy. We learn that there should be in us a sense of urgency, if not indeed desperation, if we are to venture into the kind of praying that will prevail against those forces that are out to destroy God’s children, the influence of His Kingdom and the image of His Son in this world. A mere intellectual understanding of the issues and the type of adversaries that we face will not suffice.

It is alarming when the church (and sometimes we are all guilty of it) fails to really apprehend the nature of the conflict. A disturbing aspect of New Testament teaching concerns the church’s capacity for departing from the central things of the gospel. Not, perhaps from knowledge, although this is also easily the case, but certainly from the central point of love.

1 Corinthians chapter 13 is alarming in its import. It speaks of the possibility of remarkable spiritual attainment and of extreme self sacrifice; all of which avails nothing whatsoever for lack of love. In Paul’s second letter to the Corinthians (chapter 11) equally alarmingly he speaks of the vulnerability of the church to believe and receive a wrong gospel, a different Jesus, another spirit (verse 4). He reminds them how that Satan’s ambassadors and even Satan himself are transformed into angels of light (vv.1-4; 13-15).

Jacob was strong naturally. When he remonstrates with Laban he reminds him of his great exertions (Genesis 31:40-41), but now facing Esau he is as weak as can be and realises that for all his cunning and strength and the evident blessing of God upon his life, he must now get through to God in prayer if he is to survive.

The above reading from Hosea refers to Jacob’s remarkable encounter with the Lord at Bethel. The description of that night is both awesome and thrilling (Genesis 28).

And Jacob awaked out of his sleep and said ‘surely the Lord is in this place and I knew it not’ and he was afraid and said, ‘how dreadful is this place, this is none other but the house of God and this is the gate of heaven (Gen 28:16-17).

But that experience, as wonderful as it was, was not sufficient to carry him through the impending conflict with Esau. There is a desperate and urgent need for something more. Indeed Amos speaks of Bethel in perhaps unusual terms (Amos 5 ‘But seek not Bethel…..’) The strong emphasis here is to seek God and in verse 4 of the same chapter the Lord says, "For thus saith the Lord unto the house of Israel, ‘Seek ye me and you shall live’".

The earlier experience was insufficient for the present crisis, but what is constantly and always the case is that seeking God, perhaps necessarily, at times with a great fervour, is consistently urged upon God’s people and will bring results.

One of the most wonderful promises which Jesus gave, and it appears to have no qualification and is repeated in a number of instances, is that all who ask will receive, and those that seek will find, and to those who knock, the door will be opened. How wonderful it is that in our conflict and as we gain ground in prevailing prayer, we find that we are not at all alone; the Lord had gone before us as always in the Christian experience.

A few years ago I noticed in Daniel the exciting truth that even an earthly king such as Darius the Mede had the help of the most remarkable angelic being. This extraordinary creature, whose visit to Daniel is recorded in chapter 10, informs Daniel (at the beginning of chapter 11) that "In the first year of Darius the Mede even I stood to confirm and to strengthen him". I used to think, rather wistfully, how wonderful it would be to have such an archangel confirming and strengthening one in the course that God has set before us.

However, we New Testament believers have something far better than the most powerful angelic being to help us, we have God’s own Spirit and who could be better or stronger or wiser than He? Paul, when he writes to the Ephesians, prays for them to have enlightenment, strength and to move into their inheritance and specifically he prays:

That He would grant you according to the riches of His glory to be strengthened with might by His Spirit in the inner man (Ephesians 3:16).

This direct strengthening effect of God’s Spirit must surely be invincible. Further we have the glory of Christ’s own intercession for His people and we know how effective this will be. It is surprising how Peter, when being told of his imminent fall from steadfastness, was also told in the same breath that Christ had Himself prayed for him and the prayer had been to the effect that his faith would not fail (Luke 22:31-32).

We do not know the nature of the prayer, which Christ prayed. I expect that it was fervent, passionate, probably tearful, maybe prolonged, but He knew that he had got through and that His servant’s soul would be preserved even through the most awful and dark night.

Isn’t it amazing that Peter hearing such surprising and shocking news concerning his imminent test at the instigation of Satan, was simply not listening to the Lord. He affirms his willingness to go to prison and to death not realising that his own resources would be completely inadequate, even though the Lord was explaining to him that a crisis was coming which had required intercession by Jesus Himself. He did not really respond and, perhaps he couldn’t do so at that time. He simply affirms that he is "Ready to go both into prison and to death".

Surely we are to recognise, with the Lord’s help, the level of the conflict that we now face, the power of the adversaries arrayed against us and to seek the Lord. Firstly for the clearest understanding of what we are up against, but secondly to lay hold of Him because in our own strength we can do nothing.

Perhaps now is a time when the Lord is looking more than ever for those who will press through in prayer and intercede as if their very life and survival depended upon it, as Jacob’s did at the time that we have been considering.