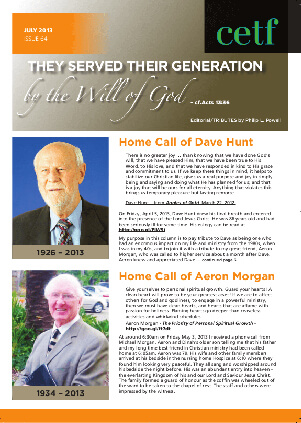 Throughout this inter-advent age–the time between Jesus’ Incarnation and Second Coming, or Parousia—Jesus and John warned that false prophets would arise preaching the doctrine of replacement “christs” (Matthew 24:5, 23-24; 1 John 2:18). As Jesus’ coming draws nearer, and as pictured by the image of Messiah’s birth pangs (Matthew 24:8), we can expect that announcements of anti-christs by false prophets will multiply and proliferate. Some of these false messiahs will even work deceptive “signs and wonders” (Mark 13:8, 21-22). During this age Jesus warned:

Then if any man shall say to you, look, here is Christ, or there; do not believe it. For there shall arise false Christs, and false prophets, and shall show great signs and wonders; insomuch that, if it were possible, they shall deceive the very elect. Behold, I have told you before. Wherefore if they shall say to you, Behold, he is in the desert; do not go: behold, he is in the secret chambers; do not believe it (Matthew 24:23-26).

There can be no greater proliferation of the anti-Christ doctrine than belief systems which teach “everybody’s a christ.” Among a host of others, Eckhart Tolle, bestselling author whose writings Oprah Winfrey has highly recommended, teaches that all humanity is indwelt by an immanent christ-spirit. He has stated: “Jesus speaks of the innermost I am, the essence identity of every man and woman... Some Christian mystics have called it the Christ within...” In an earlier writing, he also stated: “In you, as in each human being, there is a consciousness far deeper than thought. It is the very essence of who you are.... it is the Christ within, or your Buddha nature." Statements like Tolle’s are all over the Internet. Everybody’s a “christ”—they just haven’t realized it. To experience “christness,” New Age prophets tell us that a shift in consciousness is needed. So we ask, what would Jesus say (WWJS) about such teaching? Before attending to “WWJS,” we should know something of the overall New Testament presentation of the Lord Jesus Christ.

In combating the Colossian heresy, Paul also stated that it was “the Father’s good pleasure for all the fullness . . . of Deity” to dwell in Jesus “in bodily form” (Combining Colossians 1:19 and 2:9, NASB). As employed by the apostle, the word “fullness” (Greek, pleroma) teaches that not only is Jesus deity, a deity existing in unity with God the Father, but also that “fullness” belongs exclusively to Him, the sameness of which cannot be shared with, claimed by or “spill over” into any other being, whether ethereally angelic or earthly human. So regarding our worldly existence and reality, “all the fullness” belongs to Jesus alone. Harris commented that the “polemical” nature of Paul’s ascription of “the fullness” belonging to Jesus Christ is that “it is in Christ and Christ alone, that the sum total of the fullness of the Godhead, no part or aspect excepted, permanently resides in bodily form.” In short, there is but one Christ, and therefore that Christ cannot exist in any other bodies.

Given the Gnosticism, Immanentism, and Messianism of the New Spirituality of the New Age, Christ’s prophetic warning becomes relevant. He stated,

So in light of the popular rise of mystic religion in the west during the last half-century, and when compared to the Bible’s teaching there’s but “one” Christ, the two places where Jesus predicted Christ could not be found becomes very interesting.

Christ in the Desert?

First, disciples are not to think that Christ is hidden somewhere in “the desert.” He will not be found, or experienced, by engaging the disciplines, solitude, and silence of ascetic monks who choose, like the Essenes and Desert Fathers, to separate themselves from the corrupting and distracting influences of a worldly civilization and church. Christ will not be found in some personal-mystical experience in a barren desert. Jesus Christ told His disciples—“Don’t look for Me there!”

Christ in the Secret Chambers?

Second, Christ, will not be discovered in “the secret chambers.” The two words in the English Bible, translated “secret chambers” (KJV and ASV) or “inner rooms” (NASB, NIV, NKJV, and NRSV), are one word in the Greek text (tameiois). In the New Testament the word is rare (See Matthew 6:6; Luke 12:3.) As a plural noun, it literally reads, “the secrets.” So we can understand Jesus to have warned the disciples: Don’t believe it when the false prophets tell you, “Look, Christ is in the secrets!” (Matthew 24:26).

About “the secrets,” one scholar wrote that Jesus was warning people that false prophets would attempt to lead them astray by “claiming that they [i.e. the false prophets] have special knowledge; whereas ordinary people do not know where the Messiah is, they do. If people will only trust them, they will lead them to him.”

Thus, we can see that Jesus’ warning is relevant to the spiritual Gnosticism (i.e., knowing) which advocates that there resides a “christ” secreted within us, “far deeper than thought,” as Tolle puts it, a “christ” awaiting the awakening and dawning of the new consciousness.

Let No Man Deceive You

These days, many peddle that there’s a secret Jesus lost in history and shrouded in mystery. This “christ”, the popular notion goes, is waiting to be revealed, exposed, and unwrapped via some new historical evidence, innovative spiritual programme, or radical shift of consciousness. Of such consciousness, Eckhart Tolle wrote:

The “second coming” of Christ is a transformation of human consciousness, a shift from time to presence, from thinking to pure consciousness, not the arrival of some man or woman. If “Christ” were to return tomorrow in some externalized form, what could he or she say to you other than this: “I am the Truth? I am divine presence. I am eternal life. I am within you. I am here. I am now.”

Guess what? Jesus tells us that we won’t find Christ “in the secrets.” Messiah is not mentalist. By human imagining, He cannot be reproduced over and over and over again in billions of human minds and hearts. About the deception that Christ can be found in the secret recesses of human consciousness, Jesus says, “Don’t you believe it!” As He first warned in His prophetic sermon:

Take heed that no man deceive you. For many shall come in my name, saying, I am Christ; and shall deceive many(Matthew 24-4b-5).

The Messiah’s coming was not, is not, and will not be secreted. Rather, in contradiction to Tolle’s dictum, His coming will be “externalized.”

His coming will not be realized by internally developing a consensus of christ-consciousness on earth below.

But as described by the apostle John, Christ will come externally from heaven above.

Behold, he comes with clouds; and every eye shall see him, and they also which pierced him: and all the peoples of the earth shall wail because of him” (Revelation 1:7).

The Christ will come openly and publicly for all to see, and this after true believers have already met “the Lord in the air” (1 Thessalonians 4:17). So in the meantime, and as ordered by Jesus, believers are not to go about looking for Christ in deserts or secrets.

Larry DeBruyn is a graduate of Taylor University (B.S., 1968) and Dallas Theological Seminary (Th. M., 1974) where he received the Charles A. Nash Award in Church History. He has authored three books: Church On the Rise, Why I am not a ‘Purpose Driven’ Pastor, (2007), Drumming Up Deception, Whether in Celebration or Contemplation--’Feeling’ the Beat, (2008) and more recently, Unshackled, Breaking Away from Seductive Spirituality (2009). Currently, Larry resides in New Palestine, Indiana with his wife Margie to whom he has been married for forty-three years. They have two adult sons. After pastoring three local churches for forty-three years, Larry now devotes his time to writing and teaching internationally. He will be touring New Zealand and Australia in September/October, 2013.