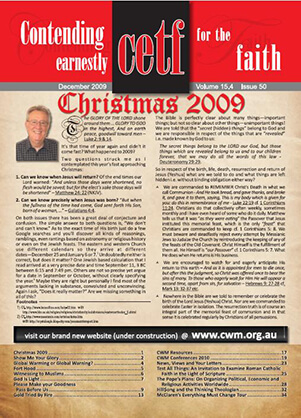 By B Michael Bigg

One of the loudest “buzz” issues being given centre stage in the world forum, apart from the global financial crisis, is global warming. The world's perspective, and in particular, the media (which thrives on controversy and sensationalism) leans towards a man-made problem, and thus a man-made solution. Though man may have added to it, can one truly say that “we” caused it?

The cycle of global warming and cooling is rather matter of fact amongst scientists; so why then is the current “warming” viewed so differently? If the world revolves from one state to another, then the tables will turn again and the world will start cooling down? The questions are when, how quickly and by how much?

Worth acknowledging in all this is that since God knows all and sees all, then this “warming” hasn't taken Him by surprise, and the fact that it is happening implies that God is at least allowing it to happen, if not making it happen. In which case, is it Global Warming or a Global Warning?

Know this first of all, that in the last days mockers will come with their mocking, following after their own lusts, and saying, "Where is the promise of His coming? For ever since the fathers fell asleep, all continues just as it was from the beginning of creation." For when they maintain this, it escapes their notice that by the word of God the heavens existed long ago and the earth was formed out of water and by water, through which the world at that time was destroyed, being flooded with water. But by His word the present heavens and earth are being reserved for fire, kept for the day of judgment and destruction of ungodly men. - 2 Peter 3:3-7

Knowing then that, ultimately, God's judgement on the world is going to be by fire, do we have any biblical reasoning to suggest that Global Warming is God's precursor and warning – a preparation for the end and a prompting for the world to repent?

The paradoxical natural of global warming is floods and drought – sea levels rise with tropical coastal areas experiencing wild storms, whilst more inland regions experience dry and parched earth and accompanying sandstorms. At the northern pole glaciers and ice shelfs are shrinking. At the southern pole glaciers, ice shelfs and sea ice are growing. The net effect is that one cancels the other out. Is this a precursor to judgement?

If we consider how drastic weather patterns have become over the last decade, and the degree to which water resources (i.e. access to fresh water) has become a focus of governments worldwide, how come the world doesn't want to hear the warnings. In south-east Queensland (Australia) the water crisis, only a couple of years ago, was so bad that combined dam levels fell to around 18%. Did Queensland, or Australia, fall to their knees … in general … no they did not. With the eventual onset of rain and the rising of dam levels (now at more than 70%) Queenslanders, though now “water wise” and “water conscious”, think little, if anything, of any possible divine influence or connection; if anything, they would probably sneer at the thought. And though south-east Queensland was given a reprieve with much needed rain, not all of Queensland has faired so well. Toowoomba, just 2 hours drive from the state’s capital (Brisbane, which is located in south-east Queensland), “dam levels will dip to nine per cent [in October 2009]”. And back in September 2009,[A] dust storm engulfing Queensland led to health concerns, traffic and airport delays, cancelled horse racing and delivered a blow to firefighting efforts by grounding water-bombing aircraft.

Water-bombing helicopters were temporarily suspended on Wednesday afternoon as the skies turned dusty orange. Unfortunately this wasn't the only dust storm for the state, or for the country. Of interest, though, are some of the comments posted on the News Limited (news.com.au) website by readers…

It doesn't matter what happens – it's nature, it's natural, it's nothing out of the ordinary. If such things are a wake up call, then it is fair to say that the world is not listening – the western world in particular.

The greatest and gravest concern about such things is that these things are not isolated events. They are global and they are increasing.Consider now what is happening in Iraq.

The Garden of Eden is in danger of turning into a dustbowl. The legendary Eden was in Mesopotamia, the land between two rivers - the Tigris and the Euphrates. For hundreds of miles between their lower reaches there is fabulously fertile farmland.

But it's hardly rained in Iraq for more than two years, the river levels have dropped by half in some places, and farmland is drying out.The drought is having a devastating effect on Iraq's most renowned export after oil - its dates.Iraq used to produce three-quarters of the world's entire date crop every year. Now, Saudi Arabia, Egypt and Iran export more dates than Iraq.…

At a date farm in Baghdad … farmed by two brothers …

they say the drought is so bad they only get dates every two years now.

From their 1,500 palm trees, they tell me they used to collect up to 50 tonnes of dates every harvest every year - last year they only got 30 tonnes.

They have had no harvest at all this year.Since 2007, Iraq has had a lot less than half its normal rainfall. This has had another effect on the date harvest - rain cleans the trees, and washes away pests that degrade the crop. Now the insects thrive, and the trees suffer…Flowing through Baghdad near the date plantation, the River Tigris is shrinking away from its banks …

There are wide patches of dry earth between the Tigris and the embankment. Abandoned boats lie high and dry where the water level used to be. Sandbanks which were once under the surface now stretch high above it.

The Tigris - and the Euphrates to the west - are 50% to 70% lower than they were 10 years ago…[The] drought in Iraq is only part of the problem.

Another factor is a series of dams on the Euphrates in Turkey and Syria, reducing flow before the river enters Iraq…. drought in Iraq is only part of the problem. The shortage of water for each river, he tells me, is caused mainly by lack of rain and snowmelt in the mountains of Turkey where the rivers rise.

In isolation, a dust storm might seem to be nothing. But when we look globally at what is happening, one can't help but wonder – if he/she has eyes to see and ears to hear.

The sixth angel poured out his bowl on the great river, the Euphrates; and its water was dried up, so that the way would be prepared for the kings from the east. - Revelation 16:12

Once upon a time it seemed strange to talk about the Euphrates drying up … but is this God showing us how easy it is for it to happen? And still the world scoffs.

Maybe the world is right, man is to blame for, and did cause Global Warming … but just not in the way they think. Man's sin leads to God's judgement, but is Global Warming a Global Warning of what is to come.

For the anxious longing of the creation waits eagerly for the revealing of the sons of God. For the creation was subjected to futility, not willingly, but because of Him who subjected it, in hope that the creation itself also will be set free from its slavery to corruption into the freedom of the glory of the children of God. For we know that the whole creation groans and suffers the pains of childbirth together until now. And not only this, but also we ourselves, having the first fruits of the Spirit, even we ourselves groan within ourselves, waiting eagerly for our adoption as sons, the redemption of our body. - Romans 8:19-23

For those interested in knowing and hearing more pertaining to Global Warming, in particular rebuttals to the pseudo-science of many of its proponents view the following web pages.

The science behind Global Warming has collapsed

The Treaty has been kept secret in their usual way, but discovered in a “note by the Secretariat”

The word “Government” is explicitly referred to in the Treaty, with powers for a communistic international Government – similar to the EU Commissars, but on a global scale