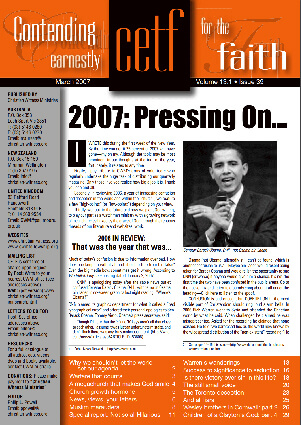 I wrote this during the fi rst week of the New Year. By the time you get it 25 percent of 2007 will have gone—my oh my. Although the topic may be most prominent in our thoughts at the turn of the year, fortunately, it relates to any time.

Firstly, I pay tribute to CWM’s army of volunteers who regularly undertake the huge task of distributing our quarterly magazine. Only those involved realise how big a job it is. Thank you one and all.

Secondly, in reviewing 2006, a year of increasing confusion and deception in the world and within the “church”, we feature a few “high-points” (or “low-points”) depending on your view.

Thirdly, we look to the future and how we plan, God willing, to play our part as a watchman ministry with a growing network of local churches linked by the grace of God through the tenuous threads of our literature and websites’ work.

Much of today’s confusion is due to information overload. How does one keep up with it all and fi lter the true from the false?Even the big media boys sometimes get it wrong. According to WorldNetDaily.com posting dated January 2, 2007: CNN *1 is apologising today after the cable news outlet confused Senator Barack Obama, D-Ill., with terrorist Osama bin Laden in on-screen graphics last night reading, “Where’s Obama?”

CNN blamed its graphics department for what it called a “bad typographical error” and offered their personal apologies to Sen. Barack Obama. Tommy Vieto, Obama’s press secretary, said: Though I’d note that the ‘s’ and ‘b’ keys aren’t all that close to each other, I assume it was just an unfortunate mistake, and don’t think there was any truly malicious intent. (http://wnd.com/news/article.asp?ARTICLE_ID=53606)

Osama (not Obama) allegedly still can’t be found, which is another confusion to us all. Maybe bin Laden would resent being taken for Barack Obama and would relish the opportunity to sue CNN (or worse) if anyone would give him a chance. It’s not the fi rst time the two have been confused in the public arena. Go to the above link and listen to a parody song about it all under the heading—Click here to listen to the spoof.

CONFUSION is bad enough, but CORRUPTION in the most visible part of Christendom should ring loud alarm bells. In 2006 Rick Warren went to Syria and offended the Christian world by what he said. When challenged he claimed he was misrepresented. Asked for the recording he claimed that none existed. He told two barefaced lies as the world now knows by the widespread distribution of the “non-existent” recording. *2 He also invited Barack Obama to Saddleback. Obama is a pro-abortionist liberal democrat who could well be the key to getting Hillary Clinton into the White House as the fi rst woman president. Warren is a member of the CFR3, which is the powerful lobby group that decides in practical terms who gets elected as president of the USA and to some extent what happens internationally.

IN CONTINUUMPart of CWM’s biblical mandate is Colossians 1:28 “Whom [Christ] we preach, warning every man, and teaching every man in all wisdom; that we may present every man mature in Christ Jesus”. By God’s grace and enabling we will not deviate in

spite of the criticisms—and there are many. CETF will continue to expose evil and evil workers.

WARNING: In this magazine several articles are so dedicated. In addition we start a column on two of the big issues: 1) MUSLIM MARAUDERS and 2) WARREN WANDERINGS. Both are international concerns. There’s so much material we could fi ll all 32 pages with it but we’ll merely summarise it with some key links.TEACHING: In this issue we hope to stimulate your thinking and challenge your devotion by carefully examining the truth about victory over sin as taught in Romans chapters 6 and 7 (see pages 18–19), and the signifi cance of the “still small voice” of Elijah’s encounter with God (pages 20–23).Later we will look at the biblical teaching on divorce and remarriage and how it affects our STANDING in Christ and our LEADERSHIP privileges. We also plan to further examine the biblical pattern for Kingdomgiving as an extension to my article on TITHING(CETF 37 pp 21-23), which created some controversy.The non-biblical teaching on this is a foundation to the heretics’ empires. That foundation needs to be shown for what it is—unbiblical and unscrupulous. The New Testament advocates stewardship based on personal (individual) responsibility, not tithing, which applied to Israel and not to the Church.WE PREACH CHRIST

2006 saw some signifi cant progress within CWM and the CWM-Fellowship (Brisbane). Visit http://www.cwmfellowship.org. Click on <churches> on the top Menu Bar. To be part of this network you only need to approve our Statements of Faith and Mission, tell us that you have no part in the word of faith or ecumenical movements and send us your church and contact details.

God bless you throughout the year,