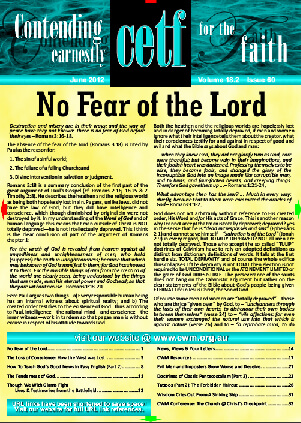 Actually, Paul warned about it when he said his goodbyes to the Ephesian church elders in Acts 20: "For I know this, that after my departure, savage wolves will come in among you, not sparing the flock. Also, from among yourselves men will rise up, speaking perverse things, to draw away the disciples after themselves," (vv. 29, 30).

To illustrate how these verses relate to what I've just viewed,  The Submerging Church quotes Rob Bell, in his notorious book, The Velvet Elvis: "

What if tomorrow someone digs up definitive proof that Jesus had a real, earthly, biological father named Larry, and archaeologists find Larry's tomb and do DNA samples and prove beyond a shadow of a doubt that the virgin birth was just a bit of mythologizing the gospel writers threw in to appeal to the followers of the Mithra and Dionysian religious cults that were hugely popular at the time of Jesus, whose gods had virgin births?"

‍What was it that Jude said? He said the ungodly men he's referring to deny "the only Lord God and our Lord Jesus Christ," i.e., His Deity! For an Emergent pastor to even suggest the possibility that Jesus Christ was not born of a virgin denies the virgin birth and the deity of the Lord Jesus all in one fell swoop! Joseph Schimmel, the producer of The Submerging Church, says, "This kind of comment shows that [Rob Bell's] faith isn't built upon Jesus Christ as God-in-the-flesh -- the God-man who came to die for our sins."

Rob Bell is a spiritual leader to thousands. Shades of Paul's chat with the Ephesian elders: "From among yourselves men will rise up, speaking perverse things . . . "

Of course, the root cause of this kind of radical and heretical departure from a foundational truth regarding God the Son is an obvious lack of respect for, and adherence to, the Word of God --  the final and objective truth of all time according to Jesus Christ. It is not surprising, therefore, to find that a peer of Bell's, Tony Jones -- a "theologian-in-residence" at the Emergent Solomon's Porch located in Minneapolis, Minnesota -- is quoted as saying, "So we must stop looking for some objective truth that is available when we delve into the text of the Bible," (Postmodern Youth Ministry, p. 201).

But that's nothing. In an article entitled, " Why is the Emerging Church drawn to deconstructive theology," Jones explains that he believes the Bible to be a subversive text and uses perverse language to express the degree of his displeasure regarding what he deems "the transgressive nature of our sacred text."

Producer Schimmel gives other examples of Emergent disregard for Scripture and likens it, appropriately, to Satan's questioning God's Word in the Garden of Eden when he queried Eve with, "Hath God said?"

Another section of this DVD that informed me discussed the Emergent Church's overall sympathy for Islam. It was well-publicized, when he first began this practice, that Brian McLaren chose to celebrate Ramadan.  Ramadan is the Muslim holy month commemorating the time Muslims believe Mohammed received the Koran through divine revelation. Question: What is an alleged Christian doing celebrating the inception of a book that denies the deity of Jesus Christ, the truth of the trinity, and the fact that Jesus Christ actually died for our sins?  According to the Apostle John, it is the spirit of antichrist that denies the Father and the Son.

But this next fact really floored me:  Do you remember the document that many Muslims and Christians signed a few years back -- A Common Word Between Us and You? Both Jan and Eric Barger have covered the scriptural inappropriateness of this document.  Well, here is the quote from the Koran from whence that document title originated:  "O people of the book! Come to a common word between us and you, that we worship none but Allah, and that we associate no partners with him, and that none of us shall take others as lords besides Allah," Sura 3:64. I was astounded to read the entire verse and realize that those who signed the Yale document were either ignorant of this Islamic passage or saw no problem committing to what the Koran plainly states.  This is what Brian McLaren celebrates and that with which the Emergent Church sympathizes.

The most disturbing, yet enlightening, information I gleaned about the Emerging Church was on the bonus DVD entitled, The Emerging Church and the Bono-Screwtape Connection. Phil Johnson, a pastor at Grace Community Church in Sun Valley, California, was shocked to discover that  Bono (the Irish Rocker) appears to be an icon of the Emerging Church movement.

"If you've been tuned in to pop-culture anytime during the past two decades, and know anything about Bono, that might help you grasp something of the look and feel of the movement," Johnson said. "Emergent types seem to quote Bono all of the time. I would say that he sometimes seems to be the chief theologian of the Emerging Church movement," ( Absolutely Not! Exposing the Post-modern errors of the Emerging Church).

Indeed, this egotistical icon who, by his own admission, denies any faith and exemplifies none of the fruits of the Spirit; regularly perverts Scripture in his music; and has praised and promoted the work of Satanists, is endorsed by Emergent leaders. Brian McLaren and Tony Campolo in their book, Adventures in Missing the Point, state, "U2's lead singer, Bono, is using his wealth and celebrity to . . . increase the kingdom of God in the here and now." A scanty perusal of Bono's life indicates lewdness and a propensity for the demonic.

What was it Jude said? He said that ungodly men would turn the grace of God into lewdness. And so it is.

I think what I appreciated most about  The Submerging Church was that it repeatedly quotes Emergent leaders -- either by video or in writing -- thus damning them with their own words; then, the producer saturates his topic with Scripture to show God's view on it. The DVD covers a wide range of topics including -- but not limited to -- Emergent & Purpose Driven; The Daniel Plan; Rick Warren's P.E.A.C.E Plan, and homosexuality. This documentary minces no words.

My heart is grieved to learn yet more of the perversity of this faction that appears to be consuming churches and deceiving even some teachers we have so long respected. But this, too, Paul warned of when he told Timothy, "But evil men and imposters will grow worse and worse, deceiving and being deceived," (II Tim. 3:13).

The good news is that it also shows the lateness of the hour and provides hope for the soon return of our coming King!

Now when these things begin to happen, look up and lift up your heads, because your redemption draws near - Luke 21:28 (NKJV).

Permission has been received by Heidi to publish this article.

Heidi lives in Maple Grove, Minnesota, with her four kids — Sunset, Kiki, Miss Marple and Talitha.Okay, they’re cats. Still, it’s family. She likes to embroider (if only there were time!), read (trying to fit that in), watch reruns of Hart to Hart and MacGyver, bike, cook and spend time with friends (God has blessed her with so many that it’s hard to keep up! Quite the problem!)

Heidi works with Jan Markell at Olive Tree Ministries and is also the director of the Minnesota Chapter of the Hollywood Prayer Network.  Her Website is http://untiljesuscomes.org/