Knowing Him
The Prophet's Judgement
With Giants Fight
Replacement Theology : Part 2
The Longing of the Lord
The Emergent: Part 1
David Douglas 1926-2014
Pope Francis 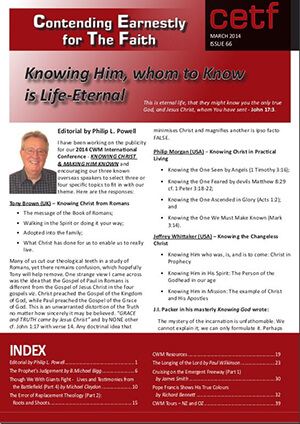 His character, personality and humour were contagious to the end. Known for his strong protestant stand for the gospel throughout his long life he nevertheless was able to quip that in his 87th year he suffered “purgatory” and we all knew what he meant. “I never signed up for this, old age” He joked. “It’s purgatory.”

His wife Betty stood by him to the end never complaining about the trials and sufferings. I first heard of the Reverend David Douglas, when I was ministering in New Zealand, where I had taken a strong stand against the false “signs and wonders” movement known as the Toronto Blessing later branching out into the so called Pensacola Revival. We joined forces in our preaching and writing with David and members of his family joining us in our Christian Witness Ministrieswork initially through the Evangelistic Paper which I publish called Contending EARNESTLY for THE Faith. DD remained a faithful and loyal friend, counsellor, advisor and elder from the time when he joined our fellowship until the end, when the Lord was pleased to call him home.

I and my wife Kathleen loved him and his family dearly. We laughed and wept together, joking over our differences which neither of us considered major, maintaining the harmony of the Spirit in the Bond of peace.

‍As I shared at David’s funeral on Friday February 21st we celebrate the day of his arrival, with the assurance of a triumphant arrival, along with him so long as we remain faithful. He has NOT gone; He has arrived.

Of course we sorrow with his faithful wife Betty and loyal Christian family that we will no longer enjoy his fellowship and friendship. But we KNOW we will SOON meet. “Even so come Lord Jesus”. “Maranatha”. Praise the Lord.