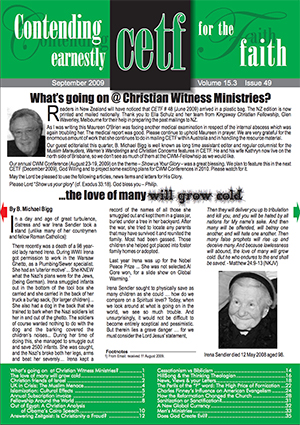 As Christians we have received from God a love for Israel and the Jewish people. We want to bless them in the name of the Lord. We believe the Lord Jesus is both the Messiah of Israel and the Saviour of the world; however our stand alongside Israel is not conditional upon her acceptance of our belief. As an organisation we exist to comfort and to support the people of Israel, and to inform Christians around the world of God’s plan for Israel. CFI teaches that the church has a responsibility toward the Jewish people, and brings awareness to Jewish people of our solidarity with them. We take His love back to the people who first brought it to us.

The general objectives of CFI include: to express friendship and solidarity with Israel and the Jewish people throughout the world; to impart an understanding to Christians of their Jewish roots and of modern Israel; to combat all forms of Anti- Semitism; to encourage Christians worldwide to intercede for Israel; to provide practical support in areas of need within the Land of Israel; to assist Jewish people who wish to return to Israel from countries where they are oppressed and to pray for their liberation from these countries; to encourage and pray for reconciliation between Jews and Arabs; to establish fellowship with Christians in Israel.

Christian Friends of Israel is a hands-on ministry with a diverse range of projects which all serve to demonstrate the love of God toward the Jewish people. These projects include:

These are just some of the many projects through which CFI minister the Love of God to the Jewish people. There are other projects that involve prayer for every town and city in Israel, bridal wear to bless the poor during their weddings; refugees who have been displaced from their homes due to political decisions in giving up land etc. All of these projects exist to practically demonstrate the love of God to the Jewish people and it doesn’t go unnoticed by the people with many people responding to such love.

Christian Friends of Israel is a practical ministry which seeks to demonstrate the love of God to the Jewish people and nation at every opportunity. It is not just “project and practically” centred for the sake of it, but uses those avenues to show the love of Christ in believers that comes through a personal relationship with Christ. The Jews, like all other people, need to receive Jesus Christ as their Lord and Saviour in order to be saved from sin and death. Christian Friends of Israel stands firm on that truth and seeks to introduce all Jews to Jesus. We love Israel because God Himself loves her and what God loves, we love! We believe that the nation of Israel is going to play a very prominent role in God’s end-time programme. An understanding of where Israel fits into God’s plan is vital for all those members of the church who desire to know where we are in God’s end-times plan. Those interested in supporting the projects and nation of Israel, or for a FREE DVD and information pack about the ministry of Christian Friends of Israel, please contact:

Note: CFI Australia also offers a $30.00 yearly subscription, for which you will receive a monthly mail-out of Israel news, teaching letter, and Watchman’s prayer letter from Jerusalem as well as two (2) quarterly magazines from Israel called, For Zion’s Sake and In Gathering plus other relevant information about Israel.