Ed Letter
Attacks on The Gospel
Love, Marriage & Faithfulness
The Shack: Part 2
The Church in Union
The Feast Of Tabernacles
Hellsong 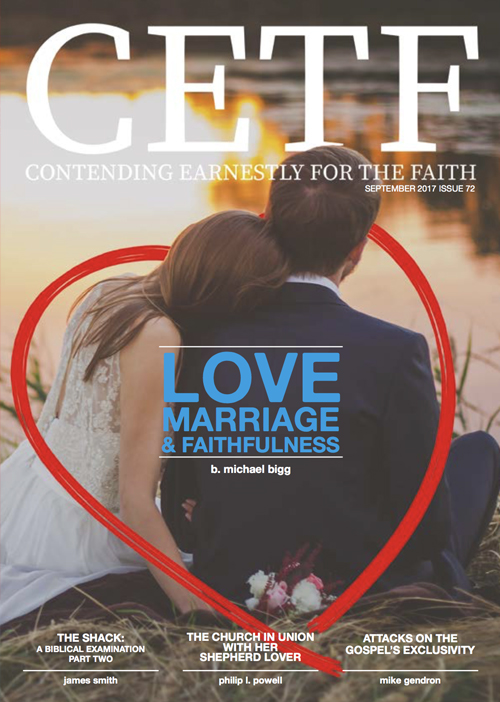 Attacks on The Gospel

The greatest attacks on the Gospel today are the frequent attempts by evangelicals to make it more inclusive to everyone who has ever been baptized. Many are seeking to broaden the narrow road by embracing and promoting apostate forms of Christianity. Some undiscerning Christians have been seduced by the pope’s aggressive ecumenical agenda to reverse the Reformation and unite all professing Christians under the papacy. Part of the pope’s strategy is to look for soft targets within the evangelical church who will promote Roman Catholicism as a valid expression of Christianity.

Tragically, his strategy has been successful and is gaining a great deal of traction. Most recently, Al Mohler, Carl Truman, Russell Moore and Matt Chandler have recommended a disturbingly popular book written by Rod Dreher (pictured left), who is a major promoter of Roman Catholicism, ecumenical unity, and contemplative prayer. Dreher is a former Catholic who converted to the Eastern Orthodox religion, not because of Rome’s false gospel, but because of its sexual abuse scandal. His book, The Benedict Option, calls people of faith to emulate a sixthcentury Catholic monk as an example of how to live in a collapsing culture. Almost all the heroes of The Benedict Option are Catholic monks who lived solitary lives in a monastery while participating in the daily sacrifice of a Eucharistic Christ.

Like most proponents of ecumenism, Dreher promotes subjective spiritual experiences over the objective truths of Scripture. He said he never had a problem with praying the rosary as a Catholic, and he now encourages his readers to practice contemplative prayer and mysticism. He said “my life is shaped around liturgy that’s been in our church for 1500 years” and “on all kinds of sensual ways that embody the faith.” His Eastern Orthodox religion preaches the same works-righteousness salvation as Catholicism and other religions. We are not to affirm or receive “anyone who goes too far and does not abide in the teaching of Christ” (2 John 9-10).

For evangelical leaders to recommend a book that applauds the heretical people and traditions of Roman Catholicism during the 500th anniversary of the Reformation is lamentable. The prevailing influence of these leaders, along with their reluctance to guard sound doctrine and reject false gospels, have left many Christians confused. They do not know if the Roman Catholic Church represents a huge mission field that needs to be evangelized or if it represents a valid expression of Christianity. They need to know that Catholicism has long been a bitter enemy of the Gospel of Christ. The apostate religion has not only condemned those who believe the Gospel, but brutally tortured and killed hundreds of thousands of those who refused to compromise it. Evangelical leaders who are sanctioning ecumenical unity with Catholics must be lovingly confronted in their error with the truth of God’s Word.

In a troubling interview with Al Mohler, Dreher said, “the West owes an incalculable debt to those Benedictine monks.” Mohler does acknowledge there are differences between their two faiths, but he said evangelicals can learn from people of the Orthodox and Catholic faith who embrace a different gospel. The apostle Paul did not encourage Christians to learn from the Judaizers who were distorting the Gospel and leading them away from Christ (Gal. 1:6- 9). Mohler says the book encourages living together in a way that is “truly Christian” yet he never defines what a true Christian is, or the Gospel that a true Christian must believe. Mohler stated, “The book is very important. I want to commend it to every thinking Christian. We ought to read this book, and we ought also to read far beyond the title.” Yet, there was a glaring omission both in the book and in the interview by Mohler and Dreher. Neither one referenced the most powerful tools Jesus Christ gave us to fight the cultural wars - His Word and His Gospel (Hebrews 4:12; Romans 1:16).

Evangelicals who endorse a book that obfuscates the lines that once separated biblical Christianity from apostate Christianity are minimizing the powerful effect of error. The accommodation of doctrinal error and falsehood will always be dangerous to the life of the Church that is called to be sanctified by the truth (John 17:17). God’s Word warns us to “be on your guard so that you are not carried away by the error of unprincipled men and fall from your own steadfastness” (2 Pet. 3:17). The critical issue in the church today is the purity of the Gospel. It is the rudder that must guide us through stormy waters that have been stirred up by every wind of doctrine (Eph. 4:14). Either we seek the approval of God by protecting the purity of the Gospel or we seek the approval of men by applauding those who peddle another gospel. There is no “option.”

As blood-bought Christians, we must contend earnestly for the faith and challenge those who embrace a false gospel. If we fail to fight the good fight of faith, we leave our own convictions and beliefs open to question. There is so much more at stake than winning cultural wars. We are also fighting the age-old war against truth waged by the powers of darkness. The truth of God’s Word is our only hope in a world spinning out of control. We must endeavour to defend the glory and honour of our Lord Jesus Christ, the purity of His Gospel, and the sanctity of His Church.

Hank Hanegraaff, known as the Bible Answer Man, was chrismated into the Orthodox Church in April 2017. According to Orthodox teachings, Chrismation is the mystery by which a person is granted the gift of the Holy Spirit through the anointing of Holy Chrism. How could a man who spent so many years helping Christians identify various counterfeits now make the most foolish decision to join a counterfeit form of Christianity? Like its former protagonist, the Roman Catholic Church, the Orthodox also teach a false and fatal gospel of salvation by sacraments and works. They are both to be accursed for teaching a gospel contrary to the Gospel of Christ (Gal. 1:6-9).

The Orthodox people do not believe or proclaim the one-time, all-sufficient, unrepeatable sacrifice of the Lord Jesus Christ for the finished work of redemption. Instead, their priests continue to offer what they believe is the physical body and blood of Jesus Christ everyday on an altar. This Eucharistic sin-offering not only blasphemes Christ, but also rejects His victory cry, “It is finished” (John 19:30). By continuing their sacerdotal priesthood, the Orthodox also reject Jesus as the one mediator between God and man (1 Tim. 2:5). In the Orthodox Church, forgiveness of sin and salvation can only come through its priests and its sacraments.

One of the immediate consequences for Hanegraaff’s conversion to the Orthodox Church was having his radio program booted from the Bott Radio Network. We applaud the network’s decision to discontinue the Bible Answer Man program after carrying it since the 1980’s. Hanegraaff’s perplexing decision to join an apostate church that long ago departed from the faith of the apostles, may have eternal consequences also. The Orthodox religion holds its people captive through an utter dependence on a superfluous priesthood for salvation, along with the idolatrous worship of icons, necromantic prayers and worship for the dead. Unlike Paul who did not yield in submission to the Judaizers so that the truth of the Gospel might be preserved, Hanegraaff has submitted to a much more corrupt religion (Gal. 2:5).

Throughout the New Testament, we are warned that there will be false converts, false teachers, and apostates in the church. We cannot judge anyone’s heart, but we must be fruit inspectors (Mat. 7:15-20). Only God knows if Hanegraaff is a true or a false convert. However, it is inconceivable that a true Christian would exchange a relationship with the One Mediator for a religion that offers ungodly mediators. Hanegraaff’s departure is not unprecedented. “They went out from us, but they were not really of us; for if they had been of us, they would have remained with us; but they went out, so that it would be shown that they all are not of us” (1 John 2:19).

We need to remember that the last days will be marked by widespread deception and growing apostasy. “The Spirit explicitly says that in later times some will fall away from the faith, paying attention to deceitful spirits and doctrines of demons” (1 Tim. 4:1). Paul exhorts the church to be on the alert. He wrote: “I know that after my departure savage wolves will come in among you, not sparing the flock; and from among your own selves men will arise, speaking perverse things, to draw away the disciples after them” (Acts 20:28-30). Only time will tell how many undiscerning people will follow Hanegraaff on the wide road to destruction.

We are living in a church age where many people are choosing to follow persuasive personalities rather than the Lord Jesus Christ and His Word. These undiscerning people need to be warned that there are eternal consequences for those who follow the teachings of men without testing them with the supreme authority of God’s Word. The only way false teachers can succeed is when professing Christians put up with them (2 Cor. 11:4). May God give us the courage and boldness to contend earnestly for the faith that was signed, sealed, and delivered 2000 years ago (Jude 3).