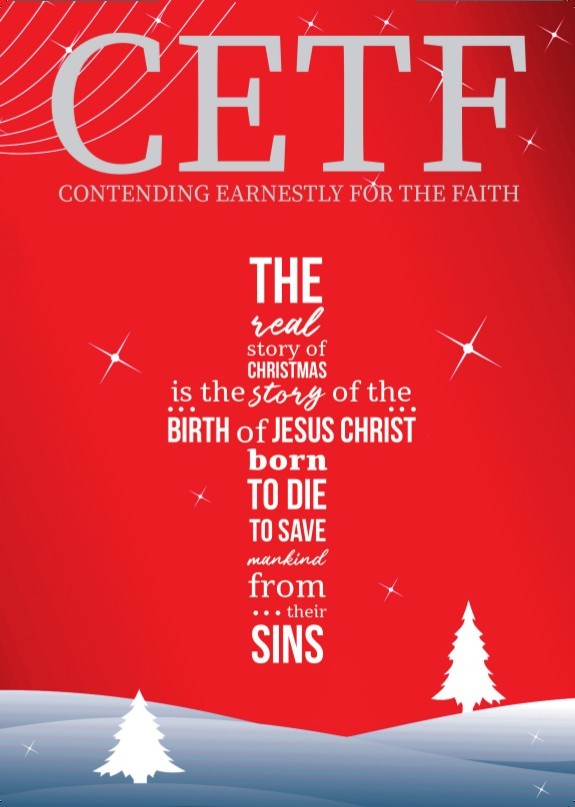 I’d like to start of this edition of CETF with an apology: I’m sorry it has taken so long for an edition of CETF to come out. It goes without saying that Christian Witness Ministries and CETF (Contending Earnestly for The Faith) was and is Philip Powell’s vision and his legacy, but as Philip would say, “All for the glory of God.” Amen! It is no surprise then that Philip’s passing has meant there have been some hiccups along the way, particularly with CETF, which I must take the blame for. That being said, I would like to commend this edition of CETF to you, and with apparent ever-quickening of time I am surprised that we’ve come to the end of another year so quickly.

But despite the passage of time it seems ever true that, “The more things change, the more they stay the same.” Therefore, other than the reference to the year, I think it apt to republish Philip’s editorial from the December 2006 edition of CETF, and for us to consider his words.

CHRISTMAS 2006 WILL SOON BE celebrated across the whole world and Christmas, whether we like it or not, signifies the birth of Jesus Christ and the start of Christianity. The well meaning objections about pagan links, have not and will not alter the essential message nor the persistent practice. The real story of Christmas is the story of the birth of Jesus Christ—born to die to save mankind from their sins. All the controversy about ancient dates and practices and modern commercialism fade in the face of the overwhelming truth announced by the angel to the shepherds:

For unto you is born this day in the city of David a Saviour, who is Christ the Lord. (Luke 2:11)

Setting aside the controversy, one interesting feature that we face is the parallel between the first Christmas and the one we will celebrate. Then Israel was the focal point and so it is today. Then the true work of God was threatened from within and from without, with the former being a greater threat than the latter, as now. You see, falsity has its own inbuilt protective device. It’s called “deception”, which by its very nature never totally discloses itself.

King Herod inquired about Christ’s birthplace and then professed worship of Him. But Herod was a terrorist who killed children and would stop at nothing to obtain his ends. The Jewish leaders professed faith in the scriptures and even quoted them, but they were hypocrites who were franchising their brand of religion wherever they went. Our Lord Jesus Christ openly denounced them as His faithful followers expose and denounce their modern counterparts:

Search the scriptures; for in them you think you have eternal life: and they are they which testify of me. And you will not come to me, that you might have life (John 5:39-40).

Woe unto you, scribes and Pharisees, hypocrites! For you compass sea and land to make one proselyte, and when he is made, you make him twofold more the child of hell than yourselves (Matthew 23:15).

Nothing has changed basically. There are few who understand and many who are led astray. All religious organisations such as Hillsong, Willow Creek and Saddleback who franchise their names and their ideas, are self-seeking cults that market false “gospels” but have not truly come to Christ themselves and so stand in the way of others coming to Him. Their image and their message are false. They even stoop to the level of using the latest pop stars simply to gain the attention of the world and to attract the crowds. Bill Hybels of Willow Creek has linked with Bono of U2 in a “Christian” tour of Australia notwithstanding the many disclosures about Bono’s lifestyle and so-called faith (type “Bono” into any search engine on the internet and read what comes up).

Christ came to change men and women, not to confirm them in their culture. There’s nothing godly about so much that masquerades as Christian in our time.

And be not conformed to this world: but be transformed by the renewing of your mind, that you may prove what is that good, and acceptable, and perfect, will of God (Romans 12:2).