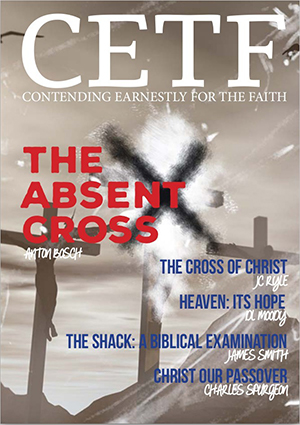 The older one gets the quicker time seems to fly by, and you realise just how short this life truly is. My eldest granddaughter is going to be fifteen in December, and I still reminisce on how cute she was at two years of age when, if she slept over at our house, she would come into my bedroom in the morning and lift one of my eyelids to see if I was awake. I think back to when I was fourteen/fifteen (it really doesn’t feel like that long ago) and oh, how much of a child I thought I wasn’t any longer.

James 4:14 says, “...You are just a vapour that appears for a little while and then vanishes away”, and it is so true. If anything, the realisation of the shortness of life should – shouldn’t it – make us consider the eternal destiny of not just our own selves, but also friends and loved ones, no matter how old or young they are; especially so of those who don’t know or walk with the Lord. It should drive us to our knees to plead with the Lord that the right person or persons cross their path (if it is not us), that they might wake from their stupor and have ears to hear. With this in mind, I commend this edition of CETF to you and the articles herein. J.C. Ryle aptly reminds us – especially at this time of the year – of the necessity of the Cross and to be wary of any religion (or church) which would minimise the Cross of Christ. C.H. Spurgeon reminds us not only of Christ’s Cross, but what it cost Christ on that Cross; that He was the Lamb of God, THE Passover Lamb who was slain for us. D.L. Moody reminds us that having come to the Cross, having come to Christ, we shouldn’t take our eyes off Him, we shouldn’t think, “Whew, made it,” and then look to this temporal life for fulfilment. For what are we building? For what are we striving? A good life here? It’s fleeting, it’s a vapour. In eternity what will it matter? When you stand before God Almighty, what will your earthly successes and achievements account for?

In 2009 CETF published a two-part article by Jeffrey Whittaker called, In My Father’s House There Are Many Shacks? A Critical Essay of William Paul Young’s THE SHACK. In this edition of CETF we include James Smith’s, A Biblical Examination of The Shack. Considering that William P. Young’s novel, The Shack, has now been made into a movie, such an examination is poignant, given the calibre of Scripturally inaccurate, and/or deficient, Bible inspired movies and TV series that have come out of Hollywood in recent years (the movie Noah, starring Russell Crowe, comes to mind).

But this raises another issue affecting Bible-believing Christians, and Christian parents in particular; and that is the movies their kids might want to see. This has always been an issue, well, for the last century anyway, but even more so now, and I think it worth commenting on.

As has been the case for some time now, movie and television productions have had a distinctive pro-homosexual bent; with many actors, singers, and performers on the world stage being advocates. “Born this Way Ball” was the name of American singer Lady Gaga’s (aka Stefani Joanne Angelina Germanotta) third tour, and she started her own non-profit foundation of the same name.

The lyrics of her 2011 song, Born this Way, which has become a homosexual anthem of sorts, includes the following stanzas:

The word “gaga” can mean enthusiastic or ecstatics, but another usage concerns senility, or being crazy. I think that just about says it all.

Disney’s recently released movie, Beauty and the Beast , a “live-action re-telling of the studio’s animated classic” includes protagonist Gaston’s sidekick, LeFou, being “confused about his sexuality,” and as director, Bill Condon, says, the film includes a “nice, exclusively gay moment.” So too, the latest Power Rangers (reboot) movie includes lesbian Yellow Power Ranger character Trini, who director Dean Israelite says is “questioning a lot about who she is” and that a pivotal moment of the film is when one of the other characters comes to the realisation that Trini is having “girlfriend problems” rather than “boyfriend problems”. The target audience of these movies are not adults, they are predominately children.

“Take religion out of schools; take it out of the classroom. Children shouldn’t be indoctrinated at school,” atheistic anti-religion supporters would cry, whilst fully supporting this form of indoctrination by stealth. This is the social engineering of children: allowing the pro-homosexual (anti- God of the Bible) camp to disciple our children IF PARENTS LET THEM!

Lady Gaga and her supporters can cry, “Born this Way,” all they want; but given cases of identical twins – meaning identical DNA – having different sexual “orientations” (i.e. one heterosexual and the other homosexual), the entire notion of born this way is shown for what it is: nonsense. It’s nothing but a good catchcry for justifying one’s sins. Gaga was raised Catholic, but now rejects institutionalised religion, and instead seems to hold a Universalist type outlook in her theology (like many others today) in which she has a belief in the idea of god, but, we’re all going to make it to heaven. Their idea of what the Bible does (or, perhaps, should) say seems to be: God loves me, Jesus doesn’t condemn, therefore I’m going to heaven. It’s like they read John 3:16-17 and fail to read past it.

“For God so loved the world, that He gave His only begotten Son, that whoever believes in Him shall not perish, but have eternal life. For God did not send the Son into the world to judge the world, but that the world might be saved through Him. He who believes in Him is not judged; he who does not believe has been judged already, because he has not believed in the name of the only begotten Son of God. This is the judgment, that the Light has come into the world, and men loved the darkness rather than the Light, for their deeds were evil. For everyone who does evil hates the Light, and does not come to the Light for fear that his deeds will be exposed. But he who practices the truth comes to the Light, so that his deeds may be manifested as having been wrought in God.” (John 3:16-21)

It is for this reason that Scripture highlights certain groups of persons (and I do NOT think this list is necessarily exhaustive or restrictive) who DO NOT make it to heaven.

“Or do you not know that the unrighteous will not inherit the kingdom of God? Do not be deceived; neither fornicators, nor idolaters, nor adulterers, nor effeminate, nor homosexuals, nor thieves, nor the covetous, nor drunkards, nor revilers, nor swindlers, will inherit the kingdom of God. Such were some of you; but you were washed, but you were sanctified, but you were justified in the name of the Lord Jesus Christ and in the Spirit of our God.” (1 Corinthians 6:9-11)

He who overcomes will inherit these things, and I will be his God and he will be My son. But for the cowardly and unbelieving and abominable and murderers and immoral persons and sorcerers and idolaters and all liars, their part will be in the lake that burns with fire and brimstone, which is the second death.” (Revelation 21:7-8)

It is not the individual sins themselves that are the point of these verses (though still relevant), but rather the LIFESTYLE that these people continue to, and continue on living. These people do NOT repent; there is NO turning from their sins. A Christian may well sin, they might slip, fall, or fail, but their conscience condemns them, and they MUST repent, and ask for God’s forgiveness. The verses above talk of people who GO ON CONTINUING in THEIR way. It is for this reason that you can be assured there are no true Christians who are hit men (what would it look like if God was “blessing” them in their work?); there are no true Christians whose occupation is that of a professional thief or conman, or who are practicing witches. Similarly, there are NO true Christians whose normal practice in life is to sleep around, or who are “shacked up” with this person or that before moving on; there are NO Christian “players”. Likewise there are NO true Christians who live a homosexual lifestyle. Either someone has repented of (i.e. turned away from and renounced) their past sinful lifestyles, and turned to God and His view of right and wrong, or they haven’t. Such persons might SAY they are Christian, but they aren’t; they cannot be.

In Anton Bosch’s article, The Absent Cross, he reminds us of supposed Christian clergy and pastors who have rejected the Cross: one of whom in 2003 said, “The fact that the cross is a symbol of division, shame, suffering and bloodshed prove that it is not of God but Satan,” and as recently as 2015, the lesbian Bishop of Stockholm proposed that a church in her diocese remove all signs of the cross and put down markings showing the direction to Mecca for the benefit of Muslim worshippers. Probably not all that surprising considering this “bishop” had already denied the truth of God’s Word in one aspect of her life that she panders to a religion whose proponents also say the Bible can’t be trusted and has been corrupted.

Either God is all-powerful or not, either God can preserve the essential truth of His Word from being corrupted or not; and if God can’t stop the Bible from being corrupted, then how can Muslims (seeing they say that Allah is the God of the Bible) guarantee the integrity of the Qur’an? They can’t. (What a joke! How is it they fail to see that they destroy the credibility of their own “holy scriptures” by making such a claim?) So, either, God is Holy and Righteous, and His Word is True (cf. Romans 3:4), or He is at best ‘mistaken’ or at worst a ‘liar’. So which is it “christian”? Which is it “christian minister”? The choices are a little more black and white than some might think!

Finally, to finish on a more positive note: in this edition of CETF we’d also like to tell you a little about Lesotho (Africa) and what Koili & Gerdien Moliko are doing for Christ.