Turned Upside Down
The Great Methodist Revolution
When He Looked...He Lived
Was Paul a Pragmatist
Classic Pentecostalism - Part 1
Capture of the Ark: Part 2
Raising the Mercy Seat
I Never Knew You
News, Views and Your Letters
A Primer for Persecution?
Islam Explained
The Music of Hillsong: Part 2
The Welsh Revivals:Part 1 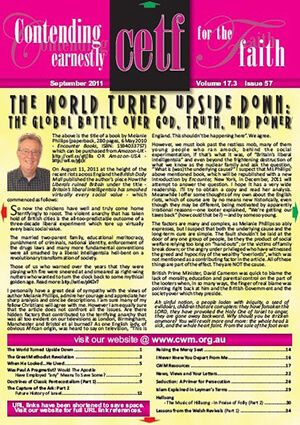 The World Turned Upside Down

The Global Battle over God, Truth, and Power

On August 11, 2011 at the height of the recent riots across England the British Daily Mailpublished the author’s piece How the Liberals ruined Britain under the title - Britain's liberal intelligentsia has smashed virtually every social value - which commenced as follows:

So now the chickens have well and truly come home terrifyingly to roost. The violent anarchy that has taken hold of British cities is the all-too-predictable outcome of a three-decade liberal experiment which tore up virtually every basic social value.

The married two-parent family, educational meritocracy, punishment of criminals, national identity, enforcement of the drugs laws and many more fundamental conventions were all smashed by a liberal intelligentsia hell-bent on a revolutionary transformation of society.

Those of us who warned over the years that they were playing with fire were sneered at and smeared as right-wing nutters who wanted to turn the clock back to some mythical golden age. Read more: http://cetf.co/p942v7

I personally have a great deal of sympathy with the views of author Melanie Phillips, admire her courage and appreciate her sharp analysis and concise descriptions. I am sure many of my fellow Christians will agree with me. However I am equally sure that the article does not confront all the issues. Are there hidden factors that contributed to the terrifying anarchy that was all too evident on our televisions as London, Birmingham, Manchester and Bristol et al burned? As one English lady, of obvious African origin, was heard to say on television, “This is England. This shouldn’t be happening here”. We agree.

However, we must look past the restless mob, many of them young people who ran amuck, behind the social experimentation, if that’s what it was, of “Britain’s liberal intelligentsia” and even beyond the frightening destruction of what we know as the nuclear family and ask the question, “What is (was) the underlying cause?” I suspect that Ms Phillips’ above mentioned book, which will be republished with a new introduction by Encounter, New York, in December, 2011 will attempt to answer the question. I hope it has a very wide readership. I’ll try to obtain a copy and read her analysis. Meanwhile I offer some thoughts of my own about the English riots, which of course are by no means new historically, even though they may be different, being motivated by apparently irrational reasons—one looter explained, “We’re getting our taxes back” (how could that be?)—and by some so young.

The factors are many and complex, as Melanie Phillips so ably expresses, but I suspect that both the underlying cause and the long-term cure are simple. The fault shouldn’t be laid at the door of any one group of people, be they the product of social welfare relying too long on “hand outs”; or the victims of family break down; or the angry under privileged who have witnessed the greed and hypocrisy of the wealthy “overlords”, which was not mentioned as a contributing factor in the article. All of these things are part of the effect. They are NOT the cause.

British Prime Minister, David Cameron was quick to blame the lack of morality, education and parental control on the part of the looters when, in so many ways, the finger of real blame was pointing right back at him and the British Government and society over which they preside.

Ah sinful nation, a people laden with iniquity, a seed of evildoers, children that are corrupters: they have forsaken the LORD, they have provoked the Holy One of Israel to anger, they are gone away backward. Why should you be stricken anymore? You will revolt more and more: the whole head is sick, and the whole heart faint. From the sole of the foot even to the head there is no soundness in it; but wounds, and bruises, and putrefying sores: they have not been closed, neither bound up, neither mollified with ointment. Your country is desolate, your cities are burned with fire: strangers devour your land in your presence, and it is desolate, as overthrown by strangers. And the daughter of Zion is left as a cottage in a vineyard, as a lodge in a garden of cucumbers, as a besieged city. Except the LORD of hosts had left to us a very small remnant, we should have been as Sodom, and we should have been like Gomorrah. Hear the word of the LORD, you rulers of Sodom; give ear to the law of our God, you people of Gomorrah - Isaiah 1:4-10.

Hard on the heels of Mr Cameron’s condemnation came an internet message from Stephen Green of Christian Voice UK– (Sat 13/08/2011 6:06 AM)

Ironically and very sadly Stephen Green, like Prime Minister David Cameron, whom he criticises, has destroyed his own credibility as was disclosed in his wife Caroline’s allegations during their recent divorce case - http://cetf.co/q83q0s

.... the whole head is sick, and the whole heart faint. From the sole of the foot even to the head there is no soundness in it; but wounds, and bruises, and putrefying sores ... see above.

When I think of these things there springs to mind an anecdote recounted by an Australian Baptist evangelist in a Crusade organised by the Katoomba Christian Fellowship during my pastorate there (1978-1980). Brian Willersdorf (BW) told of a time that he sat in a small plane next to a very nervous traveller (NT) as they awaited “take-off”.

BW: You seem nervous. Are you not used to air travel?

NT: I’m nervous of these small planes. I travel regularly on the big jets.

It turned out that the “Nervous Traveller” was part of an elite group of historians who met, sometimes weekly, in London. The conversation continued:

BW: Tell me why do you historians always deal with the facts of history but never with the forces that produce history?

NT: That’s my area of expertise. In fact right now I’m investigating why Britain of the 18th century avoided the so-called “Bloody Revolution” that occurred in France. I have concluded that it was largely because of the preaching of one man, John Wesley. In fact I am so convinced in my conclusion that I have joined a Bible study group even though I am not a Christian to find out more about the message that John Wesley preached.

Britain of Wesley’s time (1703-1791) was as dark as France in the years that led to the French Revolution (1789-1799) and much darker than what it is now. It was the Methodist Revival that saved Britain and turned the world towards God. Paul the apostle tells us what is the cause of all our ills and it’s very simple:

He likewise points to the remedy, which is also simple:

For I am not ashamed of the gospel of Christ: for it is the power of God for the salvation of everyone who believes ... - Romans 1:16.

Sadly, our legislators and other leaders have made it increasingly difficult for this generation to hear the Gospel. They have banned the Bible from the schools, outlawed biblical discipline from the homes, and projected a deep-dyed personal and corporate hypocrisy to boot. Church leaders preach anything and everything except the Gospel, which alone is able to save the individual and the nation, and if they preach it they are all too often seen as nothing better than hypocrites, because of their own moral and spiritual bankruptcy.

‍I suspect that Melanie Phillips in her book will deal with some of these aspects and other related topics in a much more lucid manner than I can. Here are some of the reviews of her Book, which impressed me:

The World Turned Upside Down: The Global Battle over God, Truth, and Power

In what we tell ourselves is an age of reason, we are behaving increasingly irrationally. More and more people are signing up to weird and wacky cults, para-psychology, séances, paganism and witchcraft. There is widespread belief in ludicrous conspiracy theories, such as the 9/11 terrorist attack being an American plot.

The basic cause of all this unreason is the erosion of the building blocks of western civilisation. We tell ourselves that religion and reason are incompatible, but in fact the opposite is the case. It was Christianity and the Hebrew Bible that gave us our concepts of reason, progress and an orderly world—the foundations of science and modernity.

The loss of religious belief has meant the West has replaced reason and truth with ideology and prejudice, which it enforces in the manner of a secular inquisition. The result has been a kind of mass derangement, as truth and lies, right and wrong, victim and aggressor are all turned upside down. In medieval-style witch-hunts, scientists who are sceptical of global warming are hounded from their posts; Israel is ferociously demonized; and the United States is vilified over the war on terror—all on the basis of falsehoods and propaganda that are believed as truth.

Thus the West is losing both its rationality and its freedoms. It is succumbing to a "soft totalitarianism," which not only is creating an ugly mood of intolerance but is undermining its ability to defend itself against Islamic aggression. While the Islamists are intent on returning the free world to the seventh century, the West no longer seems willing or able to defend the modernity and rationalism that it brought into being.

One is disturbed each day by verifiably untrue statements touted as incontrovertible facts about hot-button issues. With cold, perceptive, exhaustive and persistent passion, Melanie Phillips dissects the phenomenon among disparate movements, to reach disturbing but compelling conclusions about the erosion of modern liberal society by ideologies whose surprising interconnections are meticulously identified. One can only hope that her book will penetrate the information cocoon into which many of our intelligentsia have sealed themselves.-Richard S. Lindzen, Alfred P. Sloan Professor of Meteorology, MIT

With ferocious courage, Melanie Phillips challenges a series of myths and irrationalities that have achieved canonical status in the contemporary world. If civilization depends on the ability to give dissenting voices a hearing, then The World Turned Upside Down may well be one of the most important tests of Western civilization in our time.-Chief Rabbi Lord Sacks

Melanie Phillips has written a fascinating book that is both urgent and important, provocative and deep. It's almost a guide of the perplexed for our time.-William Kristol, Editor, The Weekly Standard

Let the Bible have the final word:

Righteousness exalts a nation, but sin is a disgrace to any people - Proverbs 14:34.

THE NEXT ISSUE will include a report of the CWM Conferences in Australia and New Zealand on The Vanishing Gospel and the Call to Preach the True Gospel.

God bless you. Please help us to get the message out by distributing CETF far and wide.