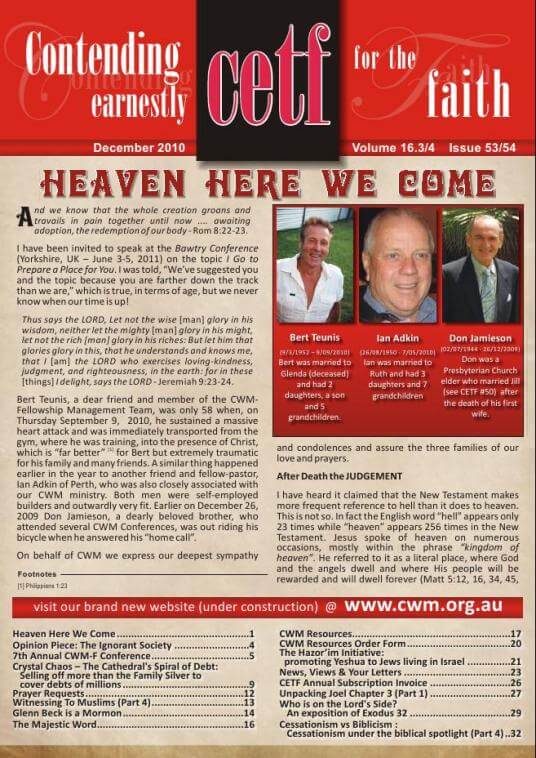 And we know that the whole creation groans and travails in pain together until now .... awaiting adoption, the redemption of our body - Rom 8:22-23.

I have been invited to speak at the Bawtry Conference (Yorkshire, UK – June 3-5, 2011) on the topic I Go to Prepare a Place for You. I was told, “We’ve suggested you and the topic because you are farther down the track than we are,” which is true, in terms of age, but we never know when our time is up!

Bert Teunis, a dear friend and member of the CWM- Fellowship Management Team, was only 58 when, on Thursday September 9, 2010, he sustained a massive heart attack and was immediately transported from the gym, where he was training, into the presence of Christ, which is “far better” for Bert but extremely traumatic for his family and many friends. A similar thing happened earlier in the year to another friend and fellow-pastor, Ian Adkin of Perth, who was also closely associated with our CWM ministry. Both men were self-employed builders and outwardly very fit. Earlier on December 26, 2009 Don Jamieson, a dearly beloved brother, who attended several CWM Conferences, was out riding his bicycle when he answered his “home call”.

On behalf of CWM we express our deepest sympathy and condolences and assure the three families of our love and prayers.After Death the JUDGEMENTI have heard it claimed that the New Testament makes more frequent reference to hell than it does to heaven. This is not so. In fact the English word “hell” appears only 23 times while “heaven” appears 256 times in the New Testament. Jesus spoke of heaven on numerous occasions, mostly within the phrase “kingdom of heaven”. He referred to it as a literal place, where God and the angels dwell and where His people will be rewarded and will dwell forever (Matt 5:12, 16, 34, 45, 48; 6:1, 9; 18:10; Mark 13:25 etc).

Behold I come quickly (Rev. 3:11; 22:7) ... and my reward is with me to give to each according as his work is (Rev. 22:12) ...yes come Lord Jesus (Rev. 22:20).I don’t know about you but it’s quite apparent to me that we are getting close to the end of the age and to the return of Christ. In the non-Christian world there is restlessness that expresses itself in anxiety, fear and, at times, crazy action. Apart from a personal relationship with God and Christ, most people today don’t know what to do or where to turn.Take as an example the perceived over-population problem of our planet. I say “perceived” because I don’t think population is the real problem. It has more to do with human greed and selfishness. We have an abundant resource and potential to produce much more than is required to sustain a far greater population than we have. But the perception is there and that perception is driving mankind to do and say incredibly evil and mad things.

Abortion at the one end of life and euthanasia at the other are justified on account of this perceived over-population threat to our planet. The richest man in the world, Bill Gates, who is a  well known supporter of abortion and whose father heads up “Planned Parenthood” to which BG has donated millions of dollars, has recently supported the notion of using inoculation to reduce population. Ostensibly his argument is that those who parent say six children, mainly to be assured of family support in old age, will settle for less, say two, if the child mortality rate is reduced by injection. However there is no guarantee that injection leads to health and there is an increasing concern that Bill Gates has a hidden agenda. Do Google searches on “Bill Gates – Euthanasia”, “Bill Gates – Abortion” and “Bill Gates – Inoculation” and research what emerges.This is only one area of grave concern. There are others. In connection with the signs of His near return Jesus spoke of:

Men's hearts failing them for fear, and the expectation of those things which are coming on the earth - Luke 21:26.

Obviously this refers to the attitude of “non-believers”. However within the true Christian world there is also a restlessness, but of a different sort. It’s a restlessness that observes the encroaching evil and desires to be rescued from it, so their cry is, “Yes come Lord Jesus!” The writer of the Romans’ passage cited above (Romans 8:22-24) alludes to this in the context:

And not only so, but ourselves also, who have the first fruit of the Spirit, even we ourselves groan within ourselves, awaiting adoption, the redemption of our body - Romans 8:23.

We live in a “groaning creation” and all true Christians groan with it. But, unlike the world without Christ, it is not the groan of despair but of hope and anticipation. This is one of the great indicators that we belong to Christ and that our faith is a true faith. It is grounded not in what we can do but in what Christ has done and will do in, by and through His return, the rapture of His Church and His second coming to this earth: “Even so, COME Lord Jesus.”For this reason, if for no other, the ideas of the Kingdom Now preachers and believers can be dismissed as false. Their hope is the bettering of society, the saving of the world, and the Christianizing of mankind. They seek an ever elusive utopia. Most of the Church Growth advocates fit into this category: Bill Hybels and Nicky Gumbel with their soft sell and non-confrontational “gospel”; Rick Warren and Robert Schuller with their winsome purposes and programmes; Brian Houston and Joel Osteen with their self-indulgent and biblically confused rants. They are not“looking for Christ” in any biblical sense. The reward that all these false teachers offer has nothing at all to do with heaven and the hereafter. It is all to do with the here and now and they themselves are the major benefactors of the pursuit of their mammon.There is no earthly benefit in “selling” heaven. That’s why the “Houstons”, “Osteens” and “Schullers” of this world don’t try.

My concern and dispute with Hillsong has always been theological. The basic objection has not been about the unacceptably high payment that Brian receives, or whether he pays taxes on his self-admitted receipt of $150,000 per annum from Hillsong plus a second $150,000 per annum from hisLeadership Ministries Incorporated (LMI) being the entity through which he and Bobbie conduct their broader ‘ministry’, outside ofHillsong Church in Australia.  I really wouldn’t know and have never pretended to know.If I correctly understand Brian’s letter, linked in the footnote below, this self admitted payment of $300,000 per year (that’s a cool $6,000 per week) does not include what his wife Bobbie receives, which Brian says is less than the amount he receives, nor does it include the fringe benefits of a Holden Caprice and a motor-bike for him (last I heard that bike was a Harley Davidson) and an Audi Q7 that Bobbie drives. As one newspaper journalist correctly commented to me, “Brian’s letter raises more questions than it answers.” I agree. Someone should publicise an analysis of what he has written including his comment about the link of Hillsong-London with The Charity Commissioners UK.While I personally consider the amount of payment and benefit, that Brian and Bobbie Houston receive to be totally unjustifiable in the light of the source of the money, coming as it does, in some cases, from poor people including no doubt “orphans and widows”, my major objection has been and will always be the false doctrine that Hillsong publishes and projects.Brian Houston’s book says it all – You Need More Money and Bobbie Houston’s series of so called “teaching tapes” entitled Kingdom Women Love Sex shows where the Hillsong juggernaut is focussed and headed. Everything relating to it is grounded in the things of this life and world. It has nothing whatever to do with Heaven or the Kingdom of Heaven.This is why Brian Houston and Hillsong will always adopt a worldly method in an attempt to resolve a spiritual and theological conflict. It would appear that they did precisely this when they were affected by my recent exposure of them and their methods in my TV interview on Channel 7 and related email and newspaper publicity. I received a threatening letter (18-08- 2010) from a company of lawyers alleging that they represented Hillsong and demanding certain action from me, which of course I refused. I wrote a response on 21- 08-2010 pointing out, among other things, that my argument with Brian Houston was theological and that he should treat it as such.Other than an acknowledgment of receipt I have heard nothing since. I remain, as I have always been, ready, willing and eager to meet Brian and any of his nominees on an agreed basis to discuss our differences. I refuse to be silenced by bully tactics or by vain unrealistic legal threats or action.I wonder what these people make of Paul’s rebuke about taking fellow- Christians to court:

Do any of you dare, when you have a matter against another, to go to law before the unjust, and not before the saints? Do you not know that the saints shall judge the world? And if the world shall be judged by you, are you unworthy to judge the smallest matters? Do you not know that we shall judge angels, not to mention the things of this life? – 1 Corinthians 6:1-3.

I take my stand on the Word of God and my freedom of speech rights in a free society and invite your prayers and support. God willing CWM will be conducting our second Conference in Bangladesh in February 2011. This is by invitation as was the first Conference (February 2010). Due to concerns about Kathleen’s and my health we have decided not to go. Our previous visit included India. On that occasion David Mohan, pastor of the 40,000 Church in Chennai thanked and commended me for our stand for TRUTH stating, “We know that it has cost you dearly and we admire you for it.” He also said to me, “Brother Powell what is it that is wrong with Rick Warren? I don’t want to make a mistake.”We apologise for the lateness of CETF #53/54, which includes the annual Voluntary Invoice for your prayerful consideration , see pages 15 & 26. We trust you enjoy and are challenged by the articles in this issue.